He says Kisii residents should be given leeway to pick their preferred leaders.

• Ongwae has since dismissed the accusation, saying he would only facilitate a conducive environment for each candidate in the race to fight it out.

•  Matoke said he would bring more development to the region if he wins the seat. 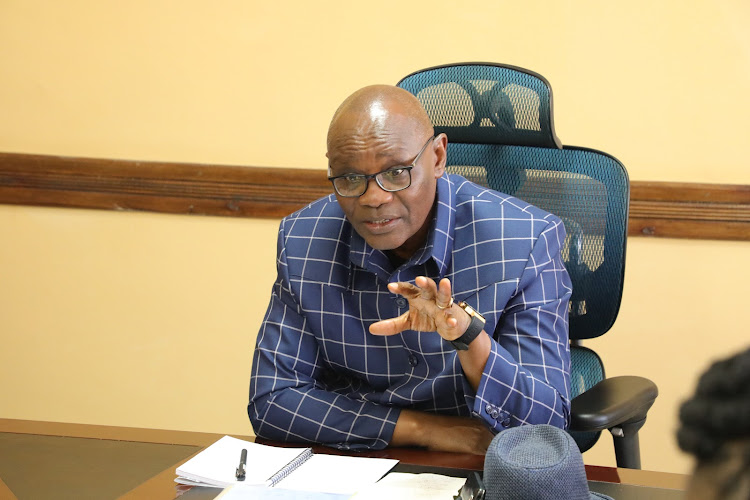 Kisii ANC governor hopeful Charles Matoke on Thursday urged Governor James Ongwae not to 'impose a successor through the backdoor'.

He said Kisii residents should be given leeway to pick their preferred leaders.

Matoke spoke when he was installed an elder in Rianyoka, Masaba South.

"You were given your time in power to do all that was due to you. If it is time to move out, do so quietly without trying to arm-twist people to support this or that candidate," he told Ongwae.

Ongwae has since dismissed the accusation, saying he would only facilitate a conducive environment for each candidate in the race to fight it out.

"I have said time and again that all those running for this office are our sons and daughters. As your governor, I will ensure the environment is conducive to all of them," he said in Tendere during a recent function.

On Thursday, however, Matoke said Ongwae is trying to prop a possible successor.

"What we know is that his time is over, let him walk out and leave people to make a decision on who will be their next governor," he said.

Matoke, who recently crossed to ANC from UDA, joins 10 other aspirants who are seeking to succeed Ongwae.

Elders who installed him said he had is now free to fight for the political spoils for his people.

"I'm only a torchbearer who leads my people out of a dark past to a future of prosperity," he said.

"I have come to you with good intentions, most of them inspired by what I have seen out there in other countries I have travelled to. We must do things differently."

Matoke said he would bring more development to the region if he wins the seat.

He said he would inject more capital and employ more health personnel to improve the sector if elected governor.

Most dispensaries and other health facilities in villages across the county are still ill-equipped to provide basic emergency healthcare to residents, he said.

"It is still a pity that a health centre is manned by one nurse, who has to be woken up at night to attend to an emergency," he said.

He also spoke of plans to modernise garbage collection and processing if he wins in August.

"Priority must be put to ensure our people don't walk on garbage as they step out of their houses. This will start by ensuring we set up a modern garbage processing plant, this will also employ hundreds of youth," Matoke said.

He also promised to set up at least one factory in the first 100 days in office to expand the job market for the youth if elected.

"There would be no luxury of time as our youth still need jobs. Farmers are not happy with brokers, it is a full tray for anybody seeking that seat," he stated.

Says financial expert William Mbaka has had checkered careers in the private sector and government.
News
6 months ago