He banks on his development track record and legislative role during his tenure as majority leader.

•Ongow has been meeting elders, youth and women from the five wards to woo voters for his candidature.

•The former Masongo/Nyang’oma MCA has pledged transformative leadership for the people of Muhoroni saying he was the best and right person for the job. 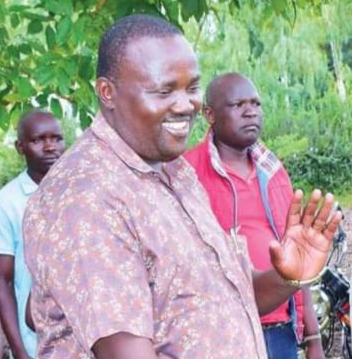 Ongow has been campaigning to seek support for his parliamentary bid.

Koyoo, who is serving his second term, will defend his seat.

Ongow has been meeting elders, youth and women from the five wards to woo voters for his candidature.

The former Masongo/Nyang’oma MCA has pledged transformative leadership for the people of Muhoroni saying he was the best and right person for the job.

Ongow remains optimistic that he will win the seat.

He banks on his development track record and legislative role during his tenure as majority leader.

Recently, Ongow was endorsed by the people of Kamrawa and Wagunga from Obago village as their candidate for the seat.

He pledged to transform road networks and champion the interests of sugarcane farmers. Ongow said top on his agenda will be education.

The former MCA said when elected he will ensure there is a body that deals with the maintenance of sugar belt roads.

This, Ongow said, will help tackle losses and waste during transporting of farm produce and canes to factories.

In his agenda dubbed my promise, other agendas include health, youth and women empowerment projects, agriculture, disability, security, sports and job opportunities for unemployed youths.

Ongow said he understands the plight of the people of Muhoroni and how best he will address them.

The incumbent, McObewa, Okal and Ongow will contest the seat on the ODM party ticket.

They are optimistic about winning as they are banking on their track record.

Even though he had not officially publicly declared his candidature for the seat, his allies said he was touted as the best to take on Nyong’o for the governor position.

However, Nyong’o’s supporters want him to pick McObewa as his running mate.

In 2017, McObewa and former governor Jack Ranguma lost to Nyong’o in disputed ODM nominations for the governor’s ticket.

McObewa has been traversing Muhoroni constituency to popularise his candidature.

“My campaigns will be issue-based. I want to transform the education sector, roads and empower youths and women,” McObewa said.

He said he will mount a well-structured campaign strategy to enable him to win.

Koyoo boasts of bringing electrification in schools and the road network since he took over in 2013.

He has been sponsoring students who perform well in the KCPE examination and get admission to any national secondary school.

He said the CDF committee usually pays 90 per cent of the fees of needy and vulnerable children and they have restructured the bursary scheme to benefit deserving students.

“Their school fees will be paid in full until they complete secondary education, irrespective of the economic status of their parents,” he said

Koyoo said he is committed to ensuring all students access education.

He said students taking engineering, medicine and architecture courses will be funded to encourage more to enrol for the courses.

He said the bursary allocation will be increased by five per cent of the annual budget of the CDF fund.

Koyoo said education remains his priority and hopes it will be a good legacy when he retires from active politics.

He has been lauded by education stakeholders, including Education Cabinet Secretary George Magoha and Sports CS Amina Mohammed for his bursary model.

The MP said his track record speaks volumes and expressed confidence in retaining his seat.

He said he has built ultramodern classrooms, dormitories and dining halls both in primary and secondary to enhance learning.

Koyoo said all aspirants are free to sell their ideologies to electorates.

The former governor aspirant has been traversing the constituency to popularise his candidature
Counties
4 months ago
by MAURICE ALAL Correspondent, Nyanza Region
Nyanza
25 January 2022 - 22:00