•The MP said those branding him as a goon have nothing to show for the time they had been in elective politics.

•He vowed to clean the mess, sanitise the job recruitment in the county and give the process the dignity it deserves. 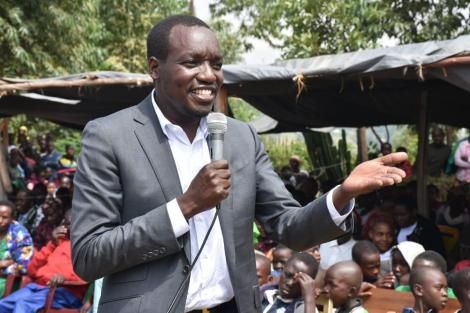 Arati said he will not target officials of the current administration but will let them live with their guilt if they ever stole from the county.

“They are scared. I am not interested in having them jailed,” he said.

Arati spoke on Sunday during a youth league meeting in Mosocho in Kitutu Chache South constituency.

He defended himself against charges that he is a thug who is incapable of leading the devolved unit.

The MP said those branding him as a goon have nothing to show for the time they have been in elective politics.

He promised a clean administration with fairness in job recruitment in the county.

Arati urged the youth to take the opportunity and change their destiny, by choosing the right leaders.

The MP and his running mate Robert Monda told ageing politicians gunning for the top county seat to give the young turks a chance. They said time was up for the old guards.

“I will set an advisory office for them at the county and get them jobs as Baba’s (Raila) advisers in Statehouse,” Arati said.

The two-term lawmaker is among 10 aspirants seeking the Kisii governor seat.

Arati accused a senior county official of trolling his campaigns with hecklers.

“We are not cowards, we are here and will soldier on to sweet victory come August,” he said.

The MP said he is not afraid of nominations if they are going to be free and fair.

He asked other ODM aspirants among them Ongeri, Ongera and Maangi to brace for a tight battle for the party ticket.

Kitutu Chache South MP Richard Onyonka who is seeking to succeed Ongeri as the senator has promised to work with Arati.

He said he was not ready to change his position.

Onyonka urged old politicians to give youthful leaders a chance.

“They have been around for too long and it is time they retired from active politics. The future is for the youth,” he said.

Onyonka said Arati is better placed to instill the discipline needed to bring order to the devolved unit.

He said he will ensure the county prioritises important development projects to benefit residents.

Onyonka said even with the payment of salaries, Kisii county could be steps ahead.

“There is nothing to show for all the funds allocated by Treasury to the county,” he said.

Onyonka said the residents had been duped for long over projects that have failed to start.

Among the projects cited are banana and sugar factories which are yet to start. “This is what Arati would address once you give him votes,” he said.

Monda told Senator Ongeri and Machogu to quit politics on account of age. He told those who defected from UDA to ODM to walk with Arati.

Says every Kenyan has a right to contest for any seat irrespective of age.
Counties
1 year ago

Says he will not hound him over graft, will take care of him as a grandson would
Counties
1 year ago
Post a comment
WATCH: The latest videos from the Star
by MAGATI OBEBO Correspondent, Kisii
Nyanza
24 January 2022 - 22:00
Read The E-Paper