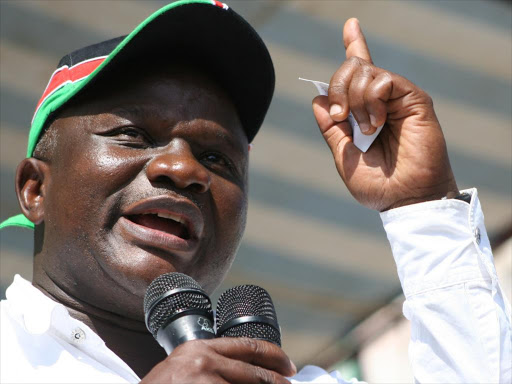 Aspirants seeking to contest on UDA party in Kisii have been assured of free, fair and transparent nominations.

The party's National Treasurer Omingo Magara urged losers in the primaries not to quit but instead continue supporting the party.

Magara who is seeking to succeeded Governor James Ongwae said DP William Ruto has assured losers that he will accommodate them in government if elected as the next President.

"A few aspirants will be nominated into various seats. The party will reward those who will lose in the nominations.

They should not desert after the primaries,  Magara said.

Those eyeing the party ticket in the gubernatorial seat include Magara, Kisii Governance Watch Secretary Rachael Otundo and Alfred Akunga.

The Treasurer challenged residents to seize the opportunity of enlisting as voters in the ongoing second and last phase launched by IEBC last week.

"Our people should take the exercise serious because it is through their vote they can get leaders of their choice," Magara added.

"They should not wait until the last minute to start rushing to registration centres."

He said the county expects to enlist about 100,000 new voters before the end of the exercise next month.

"Our people need to understand that the National Treasury will disburse funds based on the population," he said.

Speaking separately, Otundo said there is need to streamline leadership from wards, constituencies and counties.

She said they are going to mobilise party supporters at the polling stations and recruit members to coordinate party affairs.

"As leaders we are going to have a structure and form a formidable team which will campaign vigorously for the party to win mot of the elective seats" she said.

The sub-tribe left with no representation after upper Embu took all positions, they say
Counties
3 months ago

There's perception that it'll be impossible to compete against founding members.
Counties
3 months ago
by BENSON NYAGESIBA Correspondent
Nyanza
23 January 2022 - 22:00