• Ruto termed as mere political propaganda talks that ‘deep state’ or ‘system’, will decide his fate in the next general elections.

• He said the talks were set by a few billionaires who sit in Nairobi feeling they can change the Constitution to share seats and dictate votes at the expense of all Kenyans. 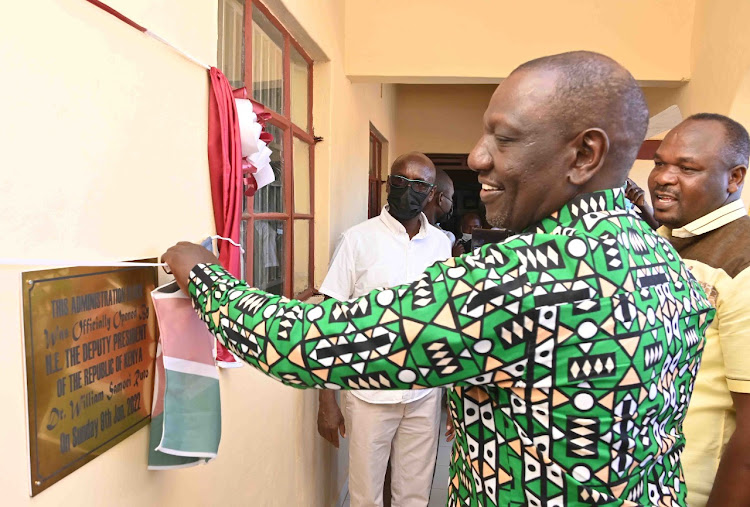 Deputy President William Ruto has dismissed talks that even if he wins, other forces may conspire to ensure he is not announced as the winner.

The DP spoke in Kuria East and Kuria West constituencies in Migori county on Sunday during a presidential campaign tour.

Ruto termed as mere political propaganda talks that ‘deep state’ or ‘system’, a group of faceless individuals controlling the country's political and economic background from shadows, will decide his fate in the next general elections.

The United Democratic Alliance flag bearer said the mandate to elect leaders lies solely with Kenyans and nobody will change that right, insisting that he is not a push over for his votes to be stolen.

“Mimi sio mtu wa kunyangaywa kura, watajua hawajui (I am not a person whose votes can be stolen). I have heard talks that even when I win the votes, deep state or system will not concede, these are propaganda,” Ruto said.

He said as deputy president of the republic for the past decade, he is aware of all government systems. He said talks of ‘deep state’ or ‘system’ were fallacies and nobody will change anything.

“On August 9 we will defeat them and there is nothing they will do, they talked of deep state and systems and we defeated them in all by elections in Msambweni, Juja and Kiambaa. Where were they then?” Ruto said.

He said the talks were set by a few billionaires who sit in Nairobi feeling they can change the Constitution to share seats and dictate votes at the expense of all Kenyans.

“No billionaire with only one vote can dictate the next voters, his vote and that of a common man are counted as one in the ballot. Nobody will sit in a boardroom and dictate who will be the next president,” Ruto said.

“The Kuria community voted for us twice in the last elections. We have done enough and we will move with them to make the next government.”

The DP said when elected, he will allocate Sh100 billion for youth employment and Sh50 billion for loans for small-scale traders.

His sentiments were shared by Kuria West MP Mathias Robi who said in the last poll it was Ruto who lead campaigns for the Jubilee party in Kuria and not President Uhuru Kenyatta.

His Kuria East counterpart Marwa Kitayama said Ruto has been working with the community and will continue to work with him.

“We voted for Uhuru who promised Kenyans he will work for ten years and pass the baton to Ruto, we will fulfil that,” Kitayama said.

In the repeat poll, Uhuru won in both constituencies with 19,587 votes in Kuria West with NASA leader Raila Odinga getting only 214 votes.

The two MPs in the region, Marwa Kitayama of Kuria East and Mathias Robi of Kuria West were both elected in Jubilee party tickets.

In 2013 general election, Raila tried a negotiated democracy between the Kuria and Luo communities to bring unity in newly formed Migori county which flopped on the ballot and was rejected by both communities.