Wanga said they have redesigned streets and created more walkways to promote a walking city CBD.

City manager Abala Wanga said no motor vehicles and motorcycles were allowed access into the CBD as they focused on implementing the non-motorised transports (NMT) system. This is a pilot project. 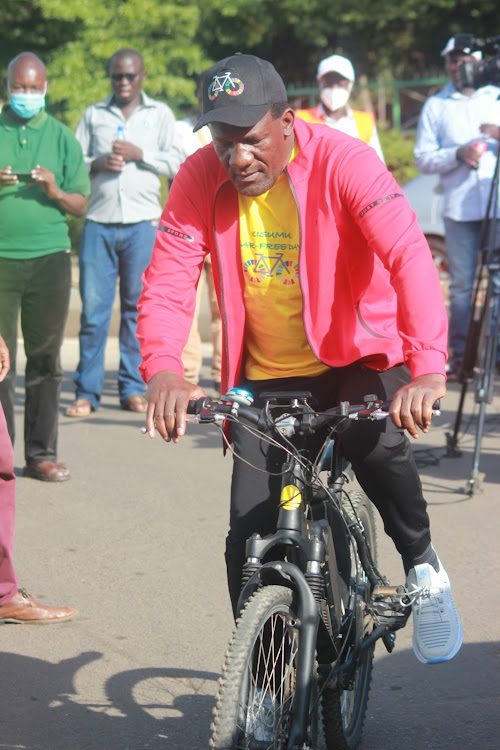 It was the second car-free Saturday — the first was early this year— the car-free-days were trial runs, part of a pilot programme.

If all goes well, and problems are ironed out, the idea is to expand it to one Sunday a month.

The future plans are under discussion about days and areas covered  but no decision has been made.

There was definitely some confusion but bicyclers and walkers were happy.

Only pedestrians and bicyclists were allowed to use the streets.

UN Habitat says car-free days are an opportunity to promote healthy living through collective exercises such as soccer, roller skating, street music and dancing, among others.

City manager Abala Wanga said no motor vehicles or motorcycles were allowed into the CBD as Kisumu aims to implement non-motorised transport. That means bicycling, walking and skating.

Wanga major streets in the city centre have been redesigned an parking areas have been removed from the main streets.

More walkways have been created too promote a walking city in the CBD..

The city manager said they are educating the public on different uses of the streets. He said residents were aware of the plans and motorists had been advised on alternative routes to access the CBD and other areas.

The car-free day project is being implemented in partnership with the Institute for Transportation and Development Policy (ITDP) and the United Nations Human Settlements Programme (UN-Habitat).

“The launch marks a great milestone in the city management’s bid to decongest the CBD and reduce certain types of air and noise pollution as we celebrate Car Free Day," Wanga said.

The second car-free day shows how the administration is committed to safer streets for pedestrians, he said.

“Together with partners, Kisumu is undertaking complementary projects to implement in the near future,” he said.

Wanga praised ITDP, UN-Habitat, Kisumu Bike Club, Buffalo Bicycles and other stakeholders for the success of the initiative.

“We also thank residents of Kisumu for the support they have displayed so far and police for their assistance in traffic control," he said. 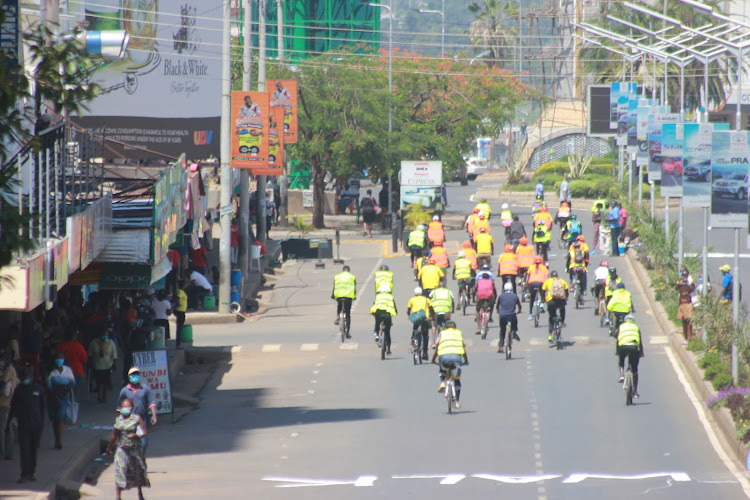 It aims to promote the well-being of residents through enhanced mobility facilities for the vulnerable road users.

“This will enhanced by tree planting for shed and benches for resting and relaxation, general landscaping for walkway ambience and solar street lighting to encourage use of the facilities into the evening,” he said.

It will also ensure raised pedestrian crossings at road intersections and links for safe and universal access.

Wanga said the city is partnering with Toyota Kenya in an enhanced urban aesthetics programme. They are adjusting roads in the CBD Triangle such as Oginga Odinga Street, Ang’awa Avenue and Jomo Kenyatta Avenue for safe and well organised traffic movement.

The City has temporarily installed barriers at the pedestrian crossings on the ‘Triangle’ to deal with motorcycles and tuktuks, notably operators using the crossings for turns, thus endangering pedestrians.

When complete, Wanga said the streets will be accessible to People with Disabilities,

The project is in its initial stages.

Additionally, he said, they will re-organise street parking on the ‘Triangle’. The city management is considering eliminating street parking along the Jomo Kenyatta Avenue from the KCB roundabout to the Tumaini/Khetias Supermarkets.

Through the NMT project, the city has provided adequate alternative parking spaces outside of the 'Triangle', such as the newly constructed parking space along  Amolo Agar Road.

When completed, the projects will further extend the NMT infrastructure.

The Kenya Urban Roads Authority will soon roll out construction of five kilometres of pedestrian walkways along certain city roads as a demonstration project for the Kisumu City Sustainable Urban Mobility Plan.

The city is working on more car-free days, more pedestrian walkways, larger car-free areas and events to increase awareness of the new policy and its benefits, Wanga said.

Countries such as Uganda, Ethiopia and Rwanda have also adopted monthly free-car days. UN Habitat says car-free days are also an opportunity to promote healthy living through collective exercises such as soccer, roller skating, street music and dancing, among others.