Ruto returns to Kisii to hunt for votes

This is DP's second visit in under two months.

• "We are still strong and optimistic of winning more support for the Deputy President, the defections notwithstanding ," she told the Star at her office. 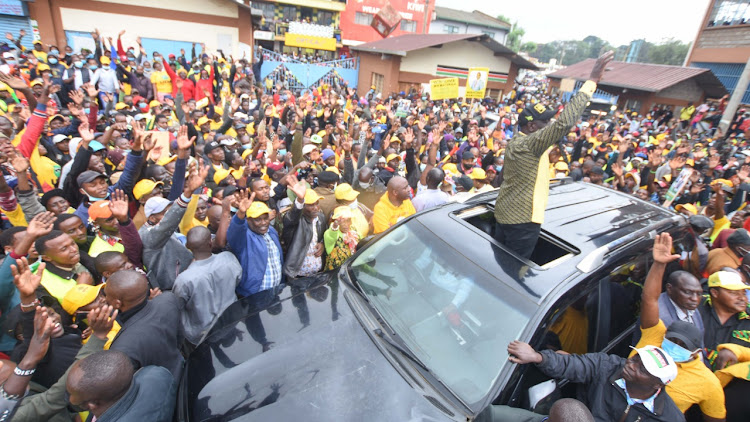 Deputy President William Ruto returns to Kisii on Wednesday  for the second round vote hunt in less than three months.

He had visited Kisii early in October, visiting Bomachoge Chache, Bomachoge Borabu and Tabaka and Nyamarambe in his two-day tour.

This comes as some politicians have defected from UDA, including former Kisiii Deputy Mayor Samuel Omwando.

Deputy Governor Joash Maangi, previously a staunch Ruto supporter, has also signaled he could be moving back to ODM following revelation that UDA was not keen on giving him the ticket to run for governorship.

On Sunday during a function in Gesusu, in Masaba South, Maangi  said he would fight it out for the ODM party ticket during nominations alongside Dagoretti North MP Simba Arati and Senator Sam Ongeri.

Youth leader Nyatichi Mogire, one of the defectors, blamed "too many parallel camps" in the DP-led outfit for defections.

On Tuesday evening , some UDA members among them gubernatorial hopeful Rachel Otundo were putting together a team to welcome the DP.

"We are still strong and optimistic of winning more support for the Deputy President, the defections notwithstanding ," she told the Star at her office.

Otundo would team up with South Mugirango MP Sylivanus Osoro and Omingo Magara, also a governor hopeful during the Wednesday visits.

Politician Jared Atancha, a Ruto critic, said the Deputy President lacks an empowered team to market him in Gusii land.

"The mismatch in his campaigns is not sufficiently giving him what he needs," said Atancha.

The county chief says he has no preferred aspirant at the moment.
Counties
8 months ago
by MAGATI OBEBO Correspondent, Kisii
Nyanza
07 December 2021 - 21:58