• Out of the Sh30 million drugs, Kemsa supplied drugs worth Sh20 million while drugs Sh10 million were procured from other suppliers 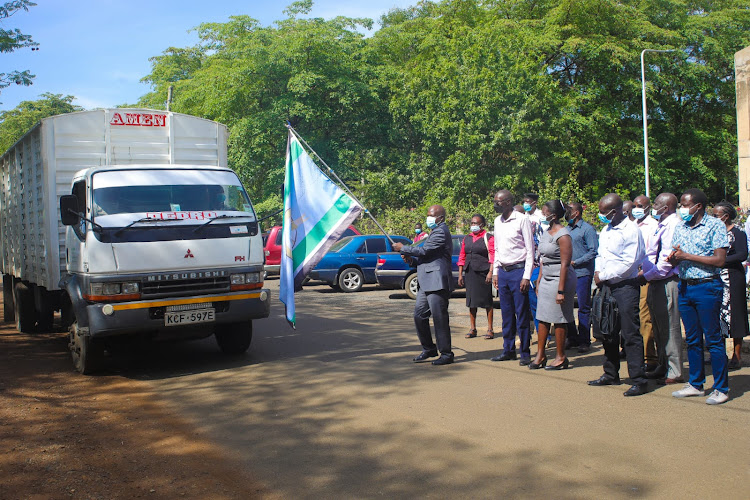 The Kisumu government has flagged off Sh30 million drugs to public hospitals.

Deputy Governor Mathews Owili said the drugs would be distributed to various health facilities across the county.

While flagging off the consignment on Monday, Owili urged residents to visit hospitals for treatment when unwell.

"We now have medicines in our hospitals and should take advantage of services offered in our facilities,"Owili said.

He lauded Governor Anyang Nyong’o for his commitment towards ensuring efficient provision of healthcare services to residents.

Ganda said out of the Sh30 million drugs, the Kenya Medical Supplies Authority supplied drugs worth Sh20 million, while the remainder was procured from other suppliers.

“There has been a delay of about three weeks because of the problems Kemsa had. When there was a change of management, our order had been made but it did not come immediately. The new management has, however, sorted it,” he said.

Ganda, who is also the acting county Health executive, said they would distribute the drugs to all primary healthcare facilities in the county.

“This order is meant to last the county for three months and we are going to make another order for January to supply drugs for February, March and April, which is within our budget as a county government,” he said.

The medic assured residents that their needs are well taken care of and should visit dispensaries and health centres for medication whenever they are sick.

He also urged residents to enroll for the county social health insurance scheme dubbed ‘Marwa’, which will be opened to the public next week.

“We need to bill together because healthcare is extremely expensive and to be able to finance health services as the population grows and our health provision continues to increase,” he said.

Obegi, who is also the acting director of medical services, said the drugs would go to more than 29 dispensaries and health centres in Muhoroni, Nyando, Seme, Kisumu East, Kisumu West and Kisumu Central subcounties.

“This comes after another order that was done from local suppliers because when we placed our first order, Kemsa did not have some stock that was vital medicines and medical supplies,” she said.

The flagged off medicine will complement the other supplies that had been procured.

“We have medicines, medical supplies and laboratory reagents in this order,” Obegi said.

In October, the Kisumu government procured drugs for county and subcounty hospitals.