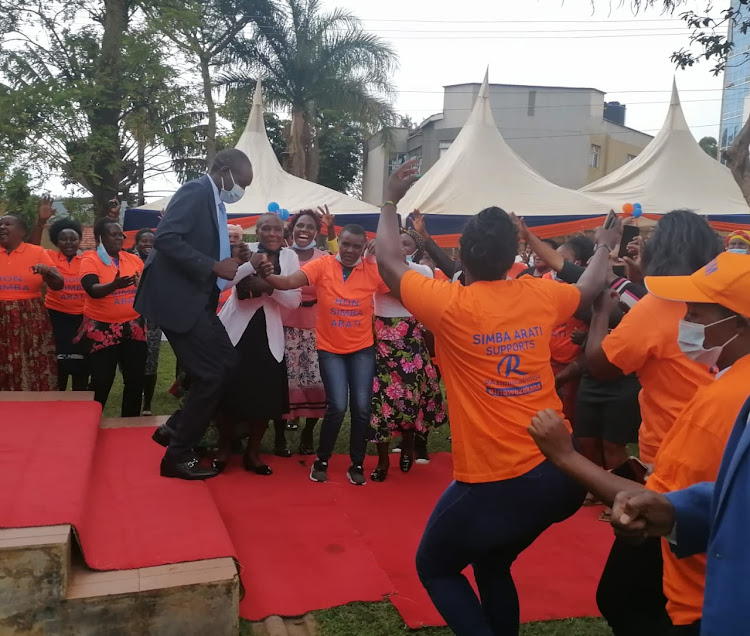 A war of words has escalated among governor aspirants in Kisii as they campaign for support.

On Saturday, Dagoretti North MP Simba Arati accused his opponents of using an incident in which Nyamagwa Catholic Church returned a donation to him to campaign against him.

Separately, Kisii Deputy Governor Joash Maangi ,who is also fighting to succeed his boss James Ongwae, described Senator Sam Ongeri’s bid as already punctured and will not bring victory to the ODM party.

Arati said it was unfortunate that his political opponents were going around making a mountain out of a small incident instead of concentrating on selling their agendas to the electorate.

“I am innocent. I did not fight in church and I am not fighting with the church. That propaganda that they are propagating is unfortunate. Let them begin selling their agenda and leave me alone,” Arati said.

He spoke during a church service at Keumbu Central SDA Church in Nyaribari Chache .

The MP has lately faced a volley of attacks after walking out of a church function at Nyamagwa parish after he was denied a chance to speak.

The incident occurred when the pope's representative visited the parish.

On Monday, a senior priest within the Kisii Catholic leadership confirmed that the Sh100, 000 donation had already been returned to the ODM firebrand.

Gubernatorial hopeful Ongeri, while speaking at his Gesusu home on Friday, accused Arati of gross disrespect.

And Governor Ongwae has since condemned the incident, saying ODM and its leadership respects churches and their leaders.

Similar sentiments were raised by Nyaribari Masaba MP Ezekiel Machogu during a burial at Kiomiti in Masaba South.

He is also vying for the top county seat. On Saturday, Arati told the politicians to steer clear of his campaigns.

He said many of them were running bankrupt of ideas to sell to their electorate. He said only wananchi should be the focal point in the campaigns, not him.

‘’Let them leave me alone and tell the people what they are going to do for them. People want to know what each candidate is going to offer; they are not going to offer me to them. I am only 40 years old while some of you are octogenarians. I am pleading with you, bring your agenda and leave it to the electorate to decide,’’ Arati said.

He said he too was brought up in church and respects church leaders. He said the opponents were using an isolated incident to tarnish him.

"We are normal people who can make mistakes but that does not mean we are committing those mistakes each day. We learn from mistakes as well," he told congregants during worship at Keumbu.

Deputy Governor Maangi described Senator Ongeri as an already injured player in the team scrambling for the governorship.

Speaking at Ongeri's prayer function at his Gesusu home, Maangi observed that owing to the number of aspirants in his backyard who had shown interest in the seat, Ongeri's chance of securing victory for the ODM party is near nil.

Ongeri, said Maangi, was surrounded by a crowd of opponents among them Ezekiel Machogu, Charles Matoke and Rachel Otundo who will trip him in his pursuit of governorship.

"My observation when I look at it is that the captain will look into this factor when the party is going to find  the right candidate who can bring victory," Maangi said.

When a player is being tackled from all sides, he should pass the ball to a player who is facing little opposition so that he can easily score, he said.