You're too old to be governor, Maangi tells Senator Ongeri, 83

Says at 83 veteran politician should call it quits and give the younger generation a chance. 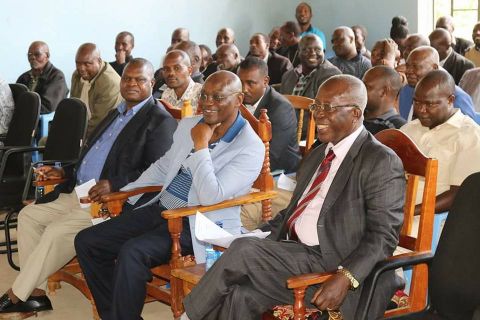 Kisii Deputy Governor Joash Maangi has asked Senator Sam Ongeri to withdraw from the governor race because he is old.

Maangi said it is time for a young leader to take over from Governor James Ongwae who retires next year.

“I respect Ongeri but I want to tell him to withdraw from the gubernatorial race because of his age. It is time for a young leader to take over the county’s leadership,” he told the Star.

Maangi, who has indicated that he will defect from UDA to ODM, said he is better suited to carry on Ongwae's work.

“I want to assure our people that I am determined to complete all projects initiated by Governor Ongwae if I am elected to office,” Maangi said.

He urged his competitors to stop engaging in abusive politics.

Arati has picked Onyonka as his running mate.

“We are telling Arati and Onyonka the tactics they are currently employing of attacking and abusing other leaders that will not help them,” Ongwae said on the phone.

Ongeri urged aspirants to respect each other.

“I sometimes get astonished when the two [Arati and Onyonka] use abusive language during their campaigns. Residents know who they will elect at the end of the day,” he said

Ong’era urged the two to engage in peaceful campaigns.

But Arati and Onyonka said they respect all leaders.

“We have never abused anybody. We have been crisscrossing the county selling our policies and agenda,” Arati said.

Defectors say there are too many parallel camps in the outfit, making it difficult to agree on the way forward.
Counties
1 month ago

He spoke of what he described as unnecessary building up of tension among the candidates.
Counties
1 month ago

Denies he'll be a compromise senatorial candidate in succession team put together by Ongwae.
Counties
2 months ago
by BENSON NYAGESIBA Correspondent
Nyanza
02 December 2021 - 06:20