A teargas canister was thrown at the facility, causing fear and commotion among customers.

• Nyanza regional commissioner Magu Mutindika said most of those held are at the police station to record statements.

• He said those who were in the bank will undergo a search and interrogation. 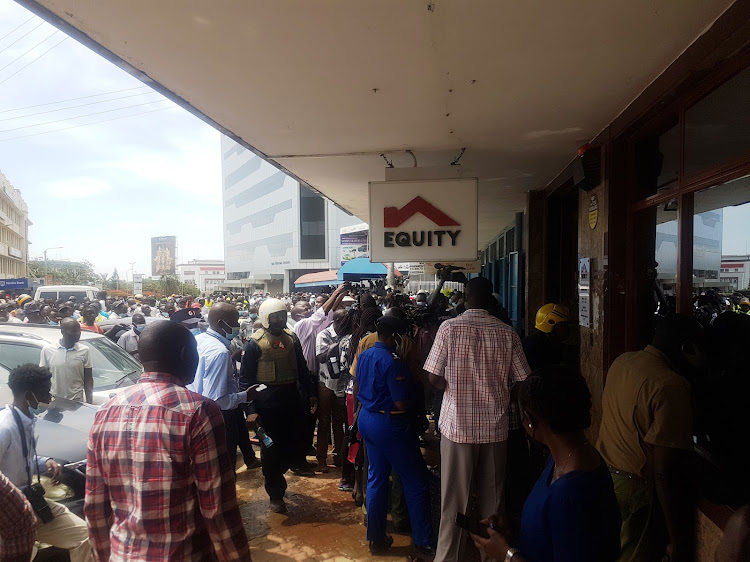 Police officers at the Kisumu's Equity Bank on the Ang'awa street during a foiled robberty attempt.
Image: MAURICE ALAL

Police in Kisumu are holding several Equity Bank staffers and customers  in connection with the foiled robbery attempt on the Ang'awa Street branch.

Nyanza regional commissioner Magu Mutindika said most of those held are at the police station to record statements.

He said those who were in the bank will undergo a search and interrogation.

“We are going to do a thorough search and if we find anybody whom we suspect to have been involved in this particular act, appropriate action will be taken,” Magu said.

Some people visited the bank and got inside while others remained outside before the attempted robbery incident at about 11.30am.

A teargas canister was lobbed causing fears and commotion among customers.

“One of the suspects wrote a note and gave a woman (cashier) demanding Sh100, 000 saying he was with four people; he said she would be killed if she didn't comply. The lady panicked and made other people flee from the bank during the commotion,” Magu said.

Magu said police will update the public on the findings.

“We want to give the police the maximum time to make sure they get the truth of the matter,” Magu said.

He said they have agreed with the bank management to work closely with the multi-agency team to review the CCTV cameras at the bank.

“We want to know those who got into the bank between 9am to 11.30am. We will be able to establish the culprits,” Magu said.

The robbers are still holed up inside the branch.
News
10 months ago

The team will be composed of police, National Intelligence Service and bank officials to review the CCTV cameras.

Inside the bank, a t-shirt was found with police suspecting that it belongs to one of those at the police station.

The owner will explain and tell the police his or her accomplice. After verification and search of the suspects at the station, Magu said police will be able to take appropriate action.

Police could not immediately establish the exact number of staffers and customers at the bank during the incident.

Nyanza regional police commander Karanja Muiruri said the suspected robbers paced back and forth inside the bank, causing fear among staff and clients.

The criminals, he said, had no guns but teargas which they threw at the officers to prevent officers from accessing the bank.

“We have the exhibit. No injuries but those rushed to the hospitals were taken due to panic,” Karanja said.

Three students who were in the bank were rescued as the gunshots rented the air. They were rushed to hospital in a police vehicle.

The female students were at the bank to pay school fees as they headed back to school from their mid-term break.

Some of the staffers who were inside the bank during the shootout were safely rescued.

A witness said he saw a slim, tall man in a checked shirt. He could not tell whether he was with other accomplices.

At about 11.25am, he was at the bank. He was with the bank manager when they heard commotion.

“We heard a cashier at the corporate section shouting. I tried to follow him and saw him removing a teargas canister from his waist which he threw inside the bank,” he said.

At that time, staff and customers including students were confused as they choked on the teargas fumes and tried to escape.

For more than three hours, police in Kisumu were engaged in a shootout with the robbers, who were said to be holed up inside the branch.

"Lala chini" statements could be heard as hundreds of curious onlookers milled around the bank.

Kisumu county firefighters are also on the scene to help neutralise the attack.

During the operation, police dogs were deployed.