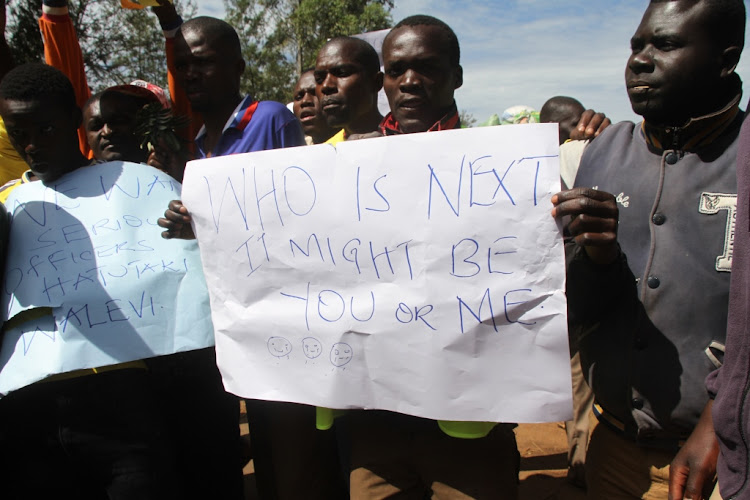 Two security guards have been killed and a woman abducted in a spate of attacks on Migori homes over the last one week.

Residents say 38 cows have also been hacked with pangas, leaving three of them dead.

On Tuesday evening, Sharon Achieng' Ojwando, who is in her early 20s and a mother of a two-year-old, is suspected to have been abducted in Masara town at about 7.30pm.

Sister Jamila Aoko said Ojwando, a loan officer, was out collecting loan repayment money from traders when she went missing.

"She is always home latest by 8.30pm. She had earlier complained that suspicious people had been following her. We reported the matter to the police and we are still searching for her," Jamila said.

On Wednesday morning, Jorum Gavaga, a night guard at a local club, was found murdered. His colleague Owino Ondego was also attacked and suffered severe panga injuries. Ondego is fighting for his life at Migori County Referral Hospital.

The body was also taken to the same hospital mortuary.

“Uriri attack came only three days after another attack on an M-Pesa operator who lost over Sh900,000 and left nursing serious injuries at a Kisii Referral Hospital. We are in shock,” Bambo said.

On Thursday, residents of Migori town found a security guard at the International Gospel Ministries murdered and musical instruments stolen.

Oruba assistant chief Charles Ouma said the guard, identified as Saitoti Masai, was hacked to death by the attackers.

“We are yet to get the CCTV footage to enable us to identify the suspects. Our preliminary investigations have, however, established that the guard was on routine patrol when the armed robbers attacked,” he said.

The body was taken to Life Care Hospital in Migori town as investigations continue.

The gang, of an unknown number of attackers, were armed with pangas and other crude weapons. They fled to a nearby sugarcane plantation without stealing any animals. The motive for the attack has yet to be ascertained.

“My children woke me up that our two Friesian cows were mooing in the shed. The cows died,” resident Kennedy Ochieng Okumu, who lost two dairy cows in the attack, said.

Phillip Oyugi said the assailants raided his brother’s homestead before passing by his home.

West Sakwa chief Paul Opuch said, “The blades were laced with poison. We have launched investigations and residents are helping police profile the suspects.”

He said residents are living in fear of attacks, with some accusing security officers from Awendo town of failing to enhance night patrols.

Francis Indeke, a veterinary officer from Migori county who visited the scene, directed that the dead animals be buried.

“I have confirmed that 35 animals have a high degree of injuries, while three have died. We have started treating the injured animals as law enforcers continue with their investigations," he said.

"I'm urging residents not to slaughter the dead animal as we are yet to ascertain whether the attackers used poisonous substances on them.”

He said the attacks coming towards the December festivities is a big worry for locals and businesspeople.