Join politics and run for all seats, women urged

The ODM women's league president says no seat is a preserve of men. 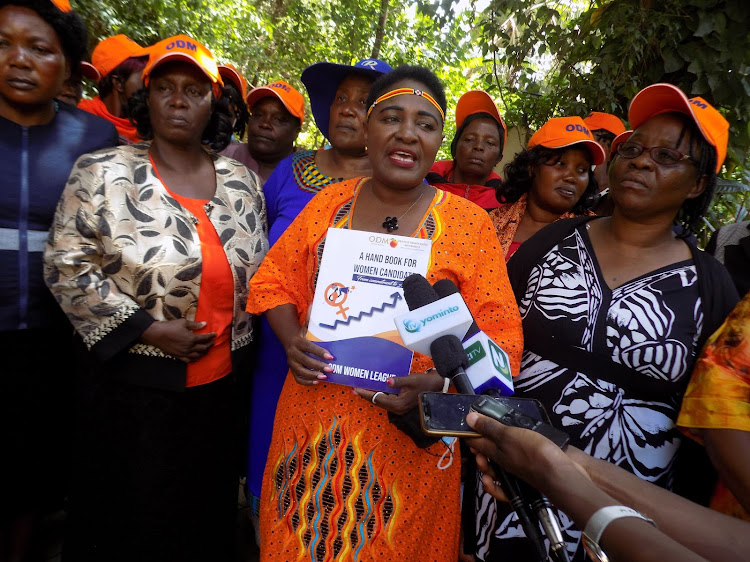 ODM's Betty Syengo has urged women to contest in all elective posts in the next election.

The ODM women's league president said no seat is a preserve of men.

Syengo said Kenya has grown democratically and gone are the days when women were seen as lesser beings.

Syengo spoke in Kisii on Friday during a one-day training for trainers of trainers and women aspirants.

“I am urging to come out in large numbers and contest for various seats,” she said.

“Our party is training women on skills to enable them to vie for seats and campaign to win them.”

Syengo said ODM has developed a handbook for women aspirants in an effort to get as many of them elected to meet the one-third gender rule.

“Our dream is to have a good number of women win elective and appointive positions. We are determined to empower them that is why we have a training manual to assist them,” Syengo said.

Kemunto, the only elected woman MCA in the county, urged women to run for election because they have the numbers.

She encouraged them to develop networks, which she said come in handy during campaigns.

Syengo said campaign violence, negative cultural perceptions and lack of funds are some of the factors that scare women away from politics.

She urged residents to embrace women leadership and give them the opportunity to exploit their potential in governance.

Barriers coming down and it's time to run for election, not hope for nomination.
Counties
3 weeks ago
by BENSON NYAGESIBA Correspondent
Nyanza
22 November 2021 - 22:00