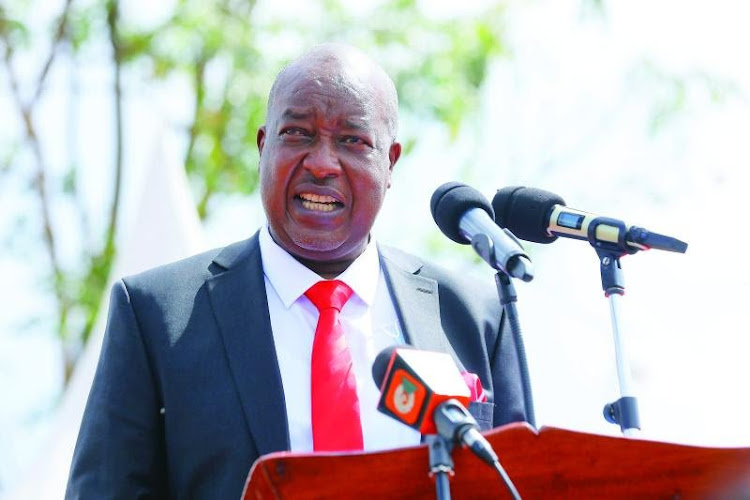 Nyamira Governor Amos Nyaribo risks six months imprisonment for contempt of court after he allegedly refused to reinstate some 1,500 county workers who were demoted.

This is after the Employment and Labour Relations Court in Kisumu granted leave to petitioners to file contempt proceedings against him.

Others facing contempt proceedings include Nyamira county and the County Public Service Board.

On September 22, 2021, employees of Nyamira county on behalf of the 1,500 filed a petition before the court challenging their demotion, terming it unprocedural.

They wanted the court to charge Nyaribo for not readmitting them to their former job groups as had been directed.

In the petition, Nyamira county, Nyaribo and Nyamira county public service board are listed as first, second and third respondents respectively.

On November 11, Justice Christine Baari granted leave for petitioners to commence the contempt of court case against the respondents.

In the contempt suit, the petitioners asked the court to grant them an order of committal against Nyaribo, county secretary James Ntabo and Finance executive Emily Ongaga.

“The actions of the first and second respondent have violated the petitioners' legal and constitutional rights to be heard and offered fair administrative action," the petition reads.

"[The administrative action] requires an employee not to alter terms of employment to the detriment of the employee unless the law is upheld."

Among the grounds by which the petitioners sought contempt of court was that the county deliberately ignored the order issued on September 22 to the detriment of them.

They said that the county (first respondent) also failed to provide itemised payment slips for all petitioners at the GHRIS platform.

The petitioners said in October and September payment slips were contrary to the court order of September 22. The amounts received were less.

“It is the interest of justice and for the purposes of upholding the dignity of the court that the orders sought herein ought to be granted,” reads the petition.

It added, “It is just and equitable to grant the reliefs sought in order to preserve the dignity of the court process and rule of law.”

The court had directed Nyaribo to withdraw the demotion of staff accused of getting illegitimate promotions.

Through their advocate, Geoffrey Yogo, the employees had also sought protection from the unfair demotion and deduction of salaries and allowances.

They had petitioned the court to order their reinstatement, but the county has yet to implement the orders.

The court had directed the respondents to maintain the terms and conditions of employment of the petitioners and staff of first respondents pending hearing and determination of the application.

“Take further notice that should you disobey the same, you should be in contempt of court and liable to imprisonment for a term not exceeding six months,” the court ruled.

Citing their case before Justice Baari, the petitioners, in their affidavits, had sworn that the governor acted on powers not bestowed on him constitutionally to discipline them.

Yogo said that the petitioners were not subjected to fair administrative actions as enshrined in the labour laws.