Elders break with tradition that shuns endorsement of women for seats. 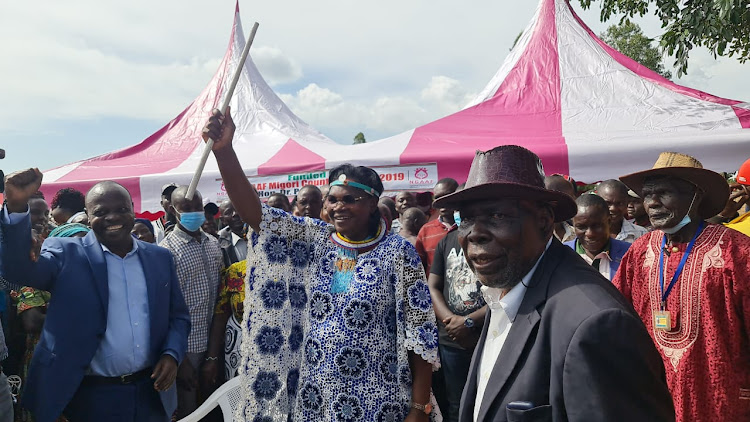 Migori governor aspirants in the 2022 general elections have upped their hunt for votes among the minority Kuria community with endorsements and campaign meetings.

Migori is cosmopolitan in Nyanza region, with the Kuria community forming about 25 per cent of the total county population. The Luo are 70 per cent and the remaining five per cent is made of other tribes.

A faction of Kuria council of elders led by their chairman Matiko Mahiri said they broke with tradition that shuns endorsement of women for seats and picked Odhiambo.

During the ceremony at Mabera, Odhiambo was accompanied by her husband Prof Romanus Odhiambo, who is the Meru University vice chancellor.

“She came with her husband and has convinced us as a community to ensure we live in peace and harmony, with jobs, development and other opportunities for all of us,” Mahiri said.

Another faction of elders endorsed Migori Senator Ochillo Ayacko as an elder and governor aspirant in August at Kehancha Korosaro, an important venue for Kuria cultural activities.

Ayacko was given the Kuria name ‘Mwita’ for a firstborn.

Odhiambo said she was ready to preach unity in the county.

Matiko Bohoko, a political analyst and former Kuria West MP aspirant, said the endorsement should be backed by extensive campaigns and meetings with other groups.

“While Ayacko was endorsed first and on cultural grounds stands better chances, Odhiambo’s endorsement shows the elders are divided and more campaigns are needed,” Bohoko said.

In the last two general elections, Migori Governor Okoth Obado won after getting major support from the Kuria community after he was installed as an elder and named ‘Chacha’.

Among key Kuria demands are picking of a deputy governor from the community and getting positions in the county government like chief officers and directors.

Obado was the only governor aspirant who was installed as an elder in the 2017 and 2013 elections,which he won.

They have already increased social functions in the Kuria region.