The youth jammed the place by 9am, chanting ODM slogans.

• The fracas broke out at the Kondele roundabout as Ruto's convoy made its way into the grounds.

• Kondele remained a no-go zone as the police battled the youth who were at the Kondele-Mamboleo-Kakamega highway.

Some of the rowdy youth moments before DP William Ruto arrived at Kondele roundabout on Wednesday, November 10, 2021.
Image: DICKENS WASONGA

Chaos rocked Deputy President William Ruto’s Kondele tour in Kisumu county after his convoy ran into a hostile reception of rowdy youths on his second visit to the lakeside city.

Fracas broke-out at the Kondele roundabout as Ruto's convoy made its way into the grounds.

Moments before he arrived in Kondele, anti-riot police officers were forced to lob teargas canisters, forcing the rowdy youth, that had thronged the area scampering for safety.

Kondele remained a no-go zone as the police battled the youth who were at the Kondele- Mamboleo- Kakamega highway.

Tension had been building early Wednesday morning at Kondele roundabout, the venue of Ruto's Wednesday meeting.

The youth jammed the place by 9am, chanting ODM slogans.

Some sang praises of ODM leader Raila Odinga as others demanded money before the meeting could happen.

Motorists heading to Kakamega, through Kondele roundabout had a hectic time negotiating their way from the area.

Some of the youth stopped vehicles, inspecting whether occupants had UDA T-shirts.

Some carried BBI placards as they chanted. "This is an ODM zone, it is Baba's bedroom".

Some of the youth claimed that an official of UDA, who was part of the planning of the DP's visit had allegedly shortchanged them.

"He was given money meant for our facilitation but pocketed the entire amount," one of the youth claimed.

Ruto who had a successful tour of the lakeside City on Tuesday, where he met UDA delegates from Siaya and Kisumu counties, was scheduled to address a group of boda boda operators and small scale traders at Kondele.

Ruto is in Nyanza to espouse his bottom-up economic model and drum-up support for his 2022 presidential bid to the residents of the city. 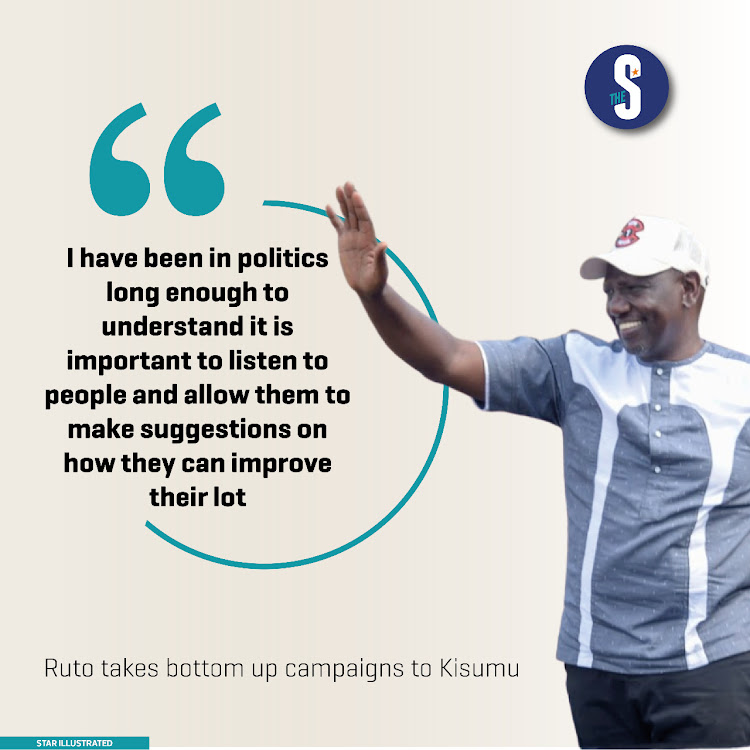 Addressing UDA supporters at Suzanna Owiyo Arts centre in Kisumu west Constituency on his first day of the three-day tour of Raila's backyard, the DP tore into the punctured BBI drive, claiming the initiative was meant to reintroduce an imperial presidency.

In a thinly veiled attack on the handshake between President Uhuru Kenyatta and Raila, Ruto insisted that the Jubilee administration lost its development agenda following the truce.

On his way to Kondele, the DP addressed roadside rallies at Ojola, and Kamas-Jua Kali area.

At 12 pm, police cleared the way, enabling the DP to access the venue.

In a brief address that lasted about five minutes, Ruto condemned the ugly standoff saying he was determined to liberate Kisumu from the culture of stone-throwing.

"To the leaders who organized this stone-throwing we have witnessed today, shame on them," he said.

Some of the rowdy youth moments before DP William Ruto arrived at Kondele roundabout on Wednesday, November 10, 2021.
Image: DICKENS WASONGA

He said Kisumu was part of Kenya and nobody should be stopped from having a meeting there.

Making his speech, amidst tight security that was punctuated by cat and mouse games between the youth and the police, Ruto gave out Sh2 million to small scale traders at Kondele.

He gave another Sh2 million to boda boda operators in the area and asked local leaders to also assist those who are vulnerable.

During his impromptu rallies before reaching Kondele, Ruto said his bottom-up approach will rejuvenate the economy while targeting the common man.

Ruto began his three-day campaigns in Raila's political turf on Tuesday, with a promise to the region that his government will be inclusive.

Ruto acknowledged the neglect and marginalisation the area was subjected to for decades by past regimes.

Addressing UDA grassroots leaders who converged at Suzanna Owiyo Arts Center in Kisumu West constituency, Ruto said, "Leaders at my level haven't taken time to engage you and listen to you."

He said he was seeking to reverse this by making sure that he engages the residents of Nyanza in economic discussions.

"I appreciate the efforts put in place so far since the Naivasha meeting that was meant to discuss these issues," he said.

Ruto said politics and governance are too important to be left to politicians alone. 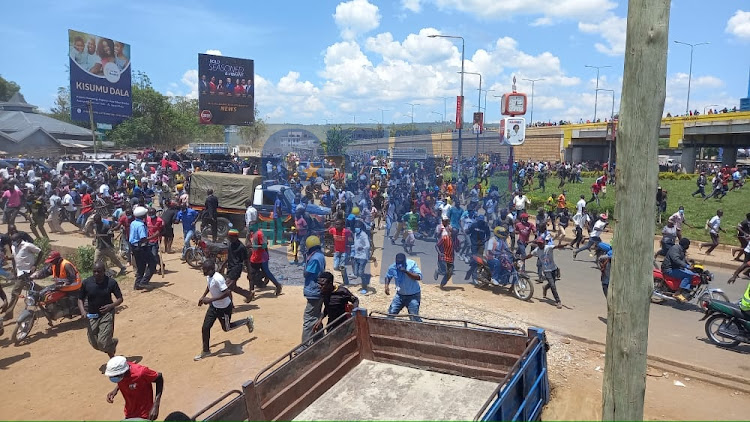 Kondele residents on their heels after police officers lobbed tear gas to disperse them as they were going to meet DP William Ruto's entourage on November 10, 2021.
Image: DANIEL OGENDO

The UDA party leader said he decided to change his approach to engage the grassroots directly because he's keen on participatory politics.

This he said was important to help ensure Kenyans identify what should take precedence in his government.

"We will not come up with plans without consultations with the grassroots," he said.

Ruto who received a rousing welcome in the lakeside city noted that many people had doubted that this kind of engagement would happen.

"You have confirmed to the rest of the country that you are ready to engage in a discourse that highlights your issues. It is an eye-opener," he noted.

Ruto told residents of Nyanza that it is never too late to do the right thing.

"I have been in politics long enough to understand it is important to listen to people and allow them to make suggestions on how they can improve their lot," he said

"We must change the course of our politics free from ethnic-based approach and consideration. I want us to critically have a discussion on what is of priority to you, what concerns and the agenda you want us to have when we form the government," he said. 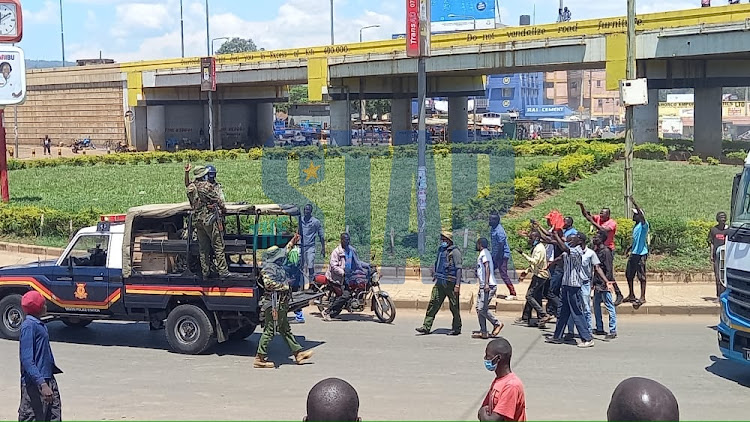 Police officers trying to cool down youths before the Deputy President William Ruto made his speech at Kondole roundabout in Kisumu on November 10, 2021.
Image: DANIEL OGENDO

He said he wants Nyanza residents to vote for an agenda and plan that will liberate them economically.

The DP said doing so will enable the region to effectively participate in development.

He pledged that his government will revive the ailing sugar sector, fix fishing and invest in small and medium-size enterprises.

"We have a serious issue in the sugar sector. We have a deficit while farmers are not treated well," he said.

He said challenges of infrastructure and poor condition of factories must be addressed.

The DP said it was regrettable that despite 15 years of attempts at privatization of sugar factories, the region was yet to get out of the woods.

"It is true we have a problem of political goodwill in trying to fix the problem facing the sector," he said.

He said in some other regions where tea is grown, farmers earn billions.

"You should be asking why here, farmers growing sugarcane gets only Sh18 billion on the same acres of land. The same size of acreage," he said.

"We need to see how farming communities from Nyanza can also earn what the tea farmers earn. We need a candid discussion on this. We must get a way to ensure this happen," he said.

Ruto said his economic model is alive to the fact that SMEs should be at the heart of the economy, thus an alternative mechanism of financing the businesses will be established.

Ruto hit out at his opponents who have been calling for the reduction of taxes in the country.

He said the only strategy to make the tax regime less punitive is to expand the tax base so that more people are brought on board.

He said his first agenda will be to make sure young people have jobs and are able to put food on the table.

"We need to engage the youth to work so that we don't worry about our security. My second agenda is to create the environment and a legal regime that supports business and avails resources for them to do business," he said.

Post a comment
WATCH: The latest videos from the Star
by DICKENS WASONGA
Nyanza
10 November 2021 - 13:13
Read The E-Paper