Families assured that police are looking for more suspects

• Maangi said the county government had waived mortuary fees, paid for the postmortems and given each family Sh100,000.

• Bosire said it was against the Gusii culture and traditions for people to kill the elderly over flimsy claims, adding that those involved stand cursed. 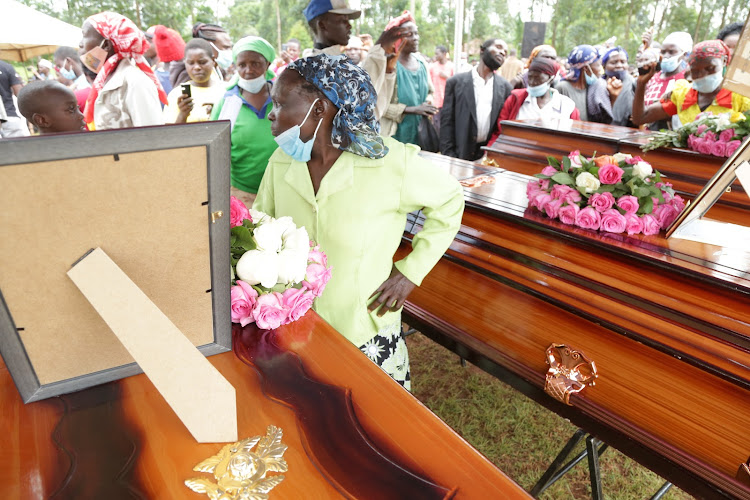 Mourners view the bodies of three women who were lynched in Nyangonyi village in Marani over suspicion of practising witchcraft last month.
Image: BENSON NYAGESIBA

Three elderly women who were torched alive on October 17 on suspicion of practising witchcraft in Kisii were buried on Saturday in Nyangonyi village, Marani.

Family members and mourners were overwhelmed with grief as the bodies of Sabina Sindege Moraa, 88, Agnes Jemimah Nyan’gate Mironga, 64, and Moraa Ototo, 63, arrived at Nyagonyi playground for the funeral service.

Among those who attended were local leaders and human rights activists.

Sigara Onkware, who was also lynched on the same day, was buried last week.

Mbanda assistant county commissioner Julius Rono assured the families that police are hunting for more suspects who were involved in the lynching.

He urged residents to volunteer information to law enforcers to help the families of the three get justice.

“I am telling those who were involved in the act to surrender to the police. We are not going to leave any stone unturned,” Rono said. He  represented Marani deputy county commissioner Patrick Murira.

“We pray for peace and harmony. Never again should this happen. I urge law enforcers to move with speed to ensure that all suspects are brought to book," he said.

Maangi, who spoke on behalf of Governor James Ongwae, said the county government had waived mortuary fees, paid for the postmortems and given each family Sh100,000.

He said the governor had formed a task force to probe the causes of such killings and beliefs in witchcraft. The team will table its findings, after which the county and national governments will implement the recommendations.

Bosire said it was against the Gusii culture and traditions for people to kill the elderly over flimsy claims, adding that those involved stand cursed.

“Life is sacred and God-given and nobody is allowed to take it. Those who were involved are cursed,” he said.

“People need to understand that human dignity is valuable and should not be taken away. It is saddening to see caskets carrying the bodies of elderly people lying in front of us,” he said.

“I urge the government to enact a law to protect the rights of elderly persons to lead a dignified life so that they do not feel threatened.”

Kerubo said succession laws should be amended to empower widows to inherit properties of their late husbands’ without challenges.

“It is bad for people to brand the elderly as witches, especially when they lose their memory because of their age. This habit of killing them must stop,” Kerubo said.

Nyaramba said old age, poverty and widowhood do not mean one becomes a witch or a wizard. "Elderly women and men should be protected at all costs,” Nyaramba said.

So far, four people have since been charged with murder. They denied the charge before Justice Roselyn Ougo. One of the accused is 17 years.

Justice Ougo ordered the four to be detained at Kisii Prison and at Manga Children’s Remand Home until Tuesday, when she will make a ruling on an application by their lawyer Shaffin Kaba on whether to they will be freed on bond or bail.