Ex-governor, senator among group teaming up to unseat Nyong'o

Say they will front a single candidate to take on Nyong'o.

• More than 20 serving and former MCAs and county government officials in Kisumu attended the burial.

• Outa and Obura said they are ready and well prepared to unseat the incumbent Nyong'o even if he was to be given a direct ODM party ticket. 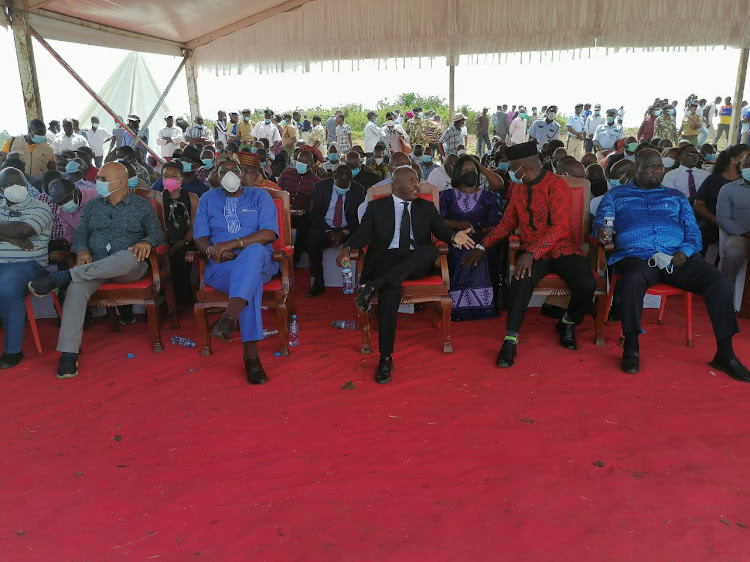 Four Kisumu governor aspirants are in negotiations to front one candidate to face incumbent Anyang' Nyong'o in 2022.

Ranguma, who lost to Nyong'o in 2017, seeks to recapture the seat.

Outa said the group will early next year unveil a candidate whom they will back to unseat Nyong'o in the next year's general elections.

"We are also in talks with other like minded leaders in our political course. By January, white smoke will be seen. A candidate shall be known," he said.

Outa said the group is also talking to Kisumu West MP Olago Aluoch and his Kisumu East counterpart Shakeel Shabir among others.

They spoke during the burial of Ranguma's daughter Sonya Ranguma in Muhoroni on Friday.

Deputy Governor Dr. Mathews Owili who was present at the burial defended the administration of Nyong'o saying they have initiated massive development projects in the county which included health facilities, water and roads.

Owili said they have initiated theatre in Muhoroni subcoubty hospital which has not been there for the past four years.

"When, we took over governments was no theatre facility. Today, there's a fully-fledged theatre in that hospital, " Owili said.

He told Outa to stick to senate seat. "You will be a worthy competitor but you should remain to senate before it is late. If it was good for Outa to be in the senate," he said.

More than 20 serving and former MCAs and county government officials in Kisumu attended the burial.

Outa and Obura said they are ready and well prepared to unseat the incumbent Nyong'o even if he was to be given a direct ODM party ticket.

The duo said they will mount an issue based campaign to ensure Nyong'o is voted out. They accused Nyong'o of poor leadership.

Outa blamed Nyong'o for inadequate drugs in various hospitals in the county despite receiving cash from the national Treasury every financial year.

"We cannot afford to have our people  die in health facilities because there is no medicine," he said.

"It is only Raila vote that is guaranteed. The rest of the seats such as governor, senate, MPs and MCA are open. Let those with a preferred list of candidates come and meet us. We will we crush them by a landslide victory," he said.

"I will not go back to Thurdibuor. I am not going back there. The cross is heavy on me and nobody is helping me. Let him come with direct ticket. We will crush him," he said.

At the same time, the senator apologised for campaigning against Ranguma in 2017 saying they are committed to correct the past mistakes.

Oloo said, "We regret for not reelecting Ranguma. Current leadership be must changed. A whole subcoubty has no road. We cannot be without drugs in hospitals. As  Kisumu county, we want transformative change."

Olago called for political tolerance. "We should respect each and every  view. Let our people register in large numbers as voters," he said.

Koyoo said the main mission of people of Nyanza should be to take Raila to state house by mobilising residents to list as voters.