READY TO FACE ANY ASPIRANT

•The MP  who was accompanied by Kitutu Chache South MP Richard Onyonka said he had made up his mind. 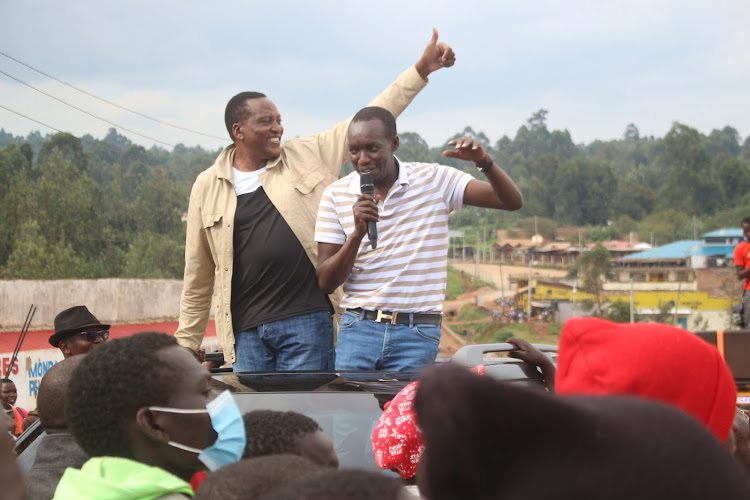 The entry of Dagoretti North MP Simba Arati in the Kisii governor’s race has thrown his opponents off balance.

Arati officially announced that he was shifting his political base from Nairobi to Kisii.

His entry is causing jitters in ODM with some party honchos feeling that Arati should remain in Nairobi.

Arati who has been traversing the county for three days, Sunday, opened parallel ODM offices at Suneka, Nyamarambe, Nyamache, Nyacheki.

The MP  who was accompanied by Kitutu Chache South MP Richard Onyonka said he had made up his mind.

He was on Sunday joined by Bonchari MP Pavel Oimeke.

Oimeke, the only elected ODM MP in Kisii also endorsed Arati for governor.

“It was difficult to decide, the people of Dagorreti North still need me but have answered calls by Kisii people to serve them,” he said.

In opening parallel party offices, Arati appeared to allay reports that he might contest the seat on a different party declaring that he was in ODM to stay.

ODM secretary general Edwin Sifuna says the party will not recognize the offices.

He said he was ready to face any aspirant eyeing the ODM ticket and dismissed reports that the ticket is reserved for a particular candidate.

“Some people are claiming that they have the ODM ticket. ODM has not issued a party ticket to anybody. We shall all face electorates in the party nominations,”  Arati said.

“I am determined to take over from Ongwae. He has done his beat and It’s my time to take over, I want to take Kisii to the next level,” Arati said.

Onyonka who had initially declared his interest in replacing Governor James Ongwae declared that he was stepping down to support Arati.

“After wide consultations, I will support my brother Arati.  Ongwae has served us well for two terms, it’s time for the younger generation to take over,” Onyonka said.

“As Abagetutu clan, we are not greedy that’s why I want another clan to take over the leadership of the county.”

Onyonka hinted that he may go for the senator’s seat.

Political analyst David Omato says the entry of Arati has rattled his opponents.

“They have to go back to the drawing board to strategize on how to contain him,”  Omato said.

Magara recently ditched PDP after he was named UDA treasurer.