•The farmers said some of them had already died out of despondency after they realized that they had nothing to harvest yet they had loans to repay.

•They are now afraid that they may lose what they listed as securities for the loans advanced to them if the government does not come to their rescue. 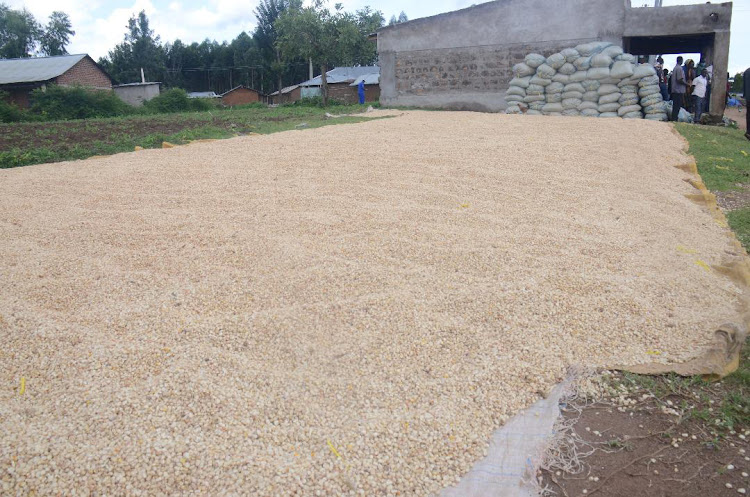 Maize being dried at Nyametaburo Market in Kuria East subcounty. Farmers nowadays prefer importing maize from Tanzania rather than growing due to erratic weather and high production costs.
Image: /KNA

Maize farmers in Migori have petitioned the government to write off loans they owe the Agricultural Farmers Corporation.

They asked other financial institutions like One Acre Fund to consider giving them a reprieve by cancelling the loans committed to their names.

The farmer said they were worried about how they would repay the loans after rains adversely affected their crop production last season.

Led by the region’s Farmer's Association chairman, Gihore Chacha, the farmers said some of them had already died out of despondency after they realized that they had nothing to harvest yet they had loans to repay.

“The government has to protect lives and rescue the stressed farmers,” Chacha said.

Farmers said the situation was worse for those who had leased land as they must service the loans in addition to the amount they incurred towards leasing land besides the production costs they incurred to grow the maize.

They leased land between Sh10,000 and Sh15,000 per acre to plant last season’s crops and they cannot account for the investments after the poor harvests.

The farmers said that AFC and other financial institutions had failed to understand that due to crop failure, they might not be able to repay their loans promptly.

They are now afraid that they may lose what they listed as securities for the loans advanced to them if the government does not come to their rescue.

As the erratic rains continued pounding the area, the farmers appealed to the government to waive loans advanced to them for this year’s agricultural activities or assist them in reviewing the repayment mode.

“AFC and other financial institutions should go slow on loan recovery. We were not able to anticipate the poor harvest last season,” James Mwita, a maize farmer in Mashangwe area, Kuria East subcounty said.

A spot check in various parts of the region, including Nyatike subcounty, revealed a sorry state that calls for the government’s urgent intervention.

The local farmers’ leadership said the government should allocate more resources towards the promotion of agriculture to improve the county’s productivity.

Some farmers appealed to the government to re-introduce the Guaranteed Minimum Return policy to cushion the farmers from the expected losses.

The farmers want the policy, which was scrapped by the government many years back to be revived saying erratic rains witnessed in the region, had adversely affected maize productivity.

The policy guaranteed farmers a minimum return of money for every acre of land appropriated for planting with an essential crop, but which has failed due to natural catastrophes.