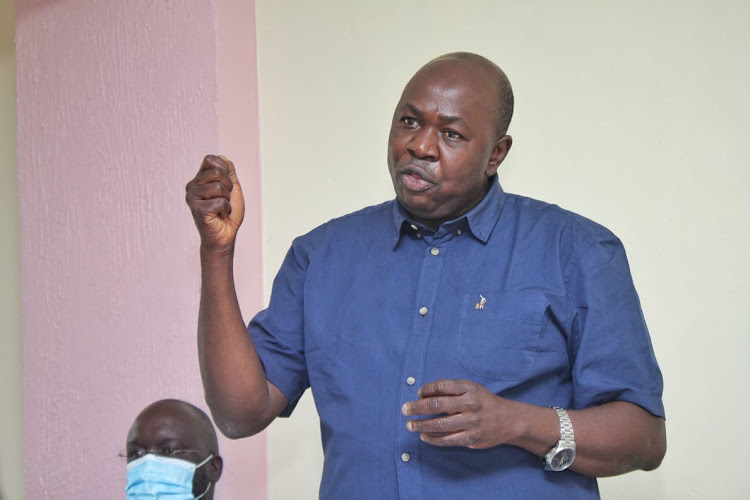 Siaya gubernatorial hopeful Charles Owino says he is set to unveil a  financing model that he believes will change how candidates fund their future campaigns.

The immediate former police spokesman says having supporters of individual aspirants foot campaign bills is the surest way to deal with corruption amongst leaders who abuse their office upon election to recoup the money spent while seeking office.

He says the approach will also eliminate the problem of cartels that have absolute control of leaders who sponsor their campaigns.

The career policeman says he is keen on pushing for a shift from the current campaign model where politicians fund their own campaigns even if doing so will cost him the seat.

“I am targeting the ordinary people. The boda boda operators and small business people and friends in this initiative. And I am prepared to lose the seat if my approach is rejected,” he said.

“My idea is to set a precedent even if I don’t become a governor. I want the young people,  who are not rich or from influential backgrounds, having equal opportunities to vie and win elections, not because they had the financial muscle to run the campaigns,” he said.

This approach has been tried in the past by some politicians in the country among them, the ODM party leader Raila Odinga, who asked his supporters to contribute towards his presidential bid in the past election.

The model has, however, failed to take root in the country. “ Kenyans should embrace the culture adopted in developed nations where it is the people who support your bid through fundraising,” he said.

Owino said that despite criticism from some of his opponents who view the approach as a weakness, he will soon unveil a fundraising drive to help him in the quest to become the next Siaya governor.

He claimed that someone leaked a fundraising poster his team had developed before the initiative was officially launched to negatively portray his candidature.

Owino said on Tuesday that although the poster,  which has gone viral was legitimate, it was leaked out for political reasons.

“To clinch the seat in Siaya county,  with six constituencies,  you need between Sh 300 to 400 million to competently manage campaigns,” he said.

“This would mean, if you are lucky to have property, you sell them to campaign, but you will need to recover it. Now, how do you recover Sh400 million if you don’t engage in corruption? ” he said.

His plan is to launch a campaign kitty which he noted will be open for public scrutiny and to other government agencies, such as the Kenya Revenue Authority. The kitty will raise funds from his supporters and his friends.

“Siaya has over 400,000 registered voters. The figure is likely to rise with the just-launched mass voter registration. If each person contributes a minimum of Sh 1000, then we will have raised the money comfortably,” he said.

He says this is also another way of gauging one’s popularity.

Owino is amongst the aspirants to have publicly announced their interest to replace Governor Cornel Rasanga who is doing his last term in office.

Owino on Tuesday told the Star that his agenda will focus on the economic transformation of Siaya and poverty reduction.

“I’ll reorganise boda boda business and make it profitable venture by encouraging a saving culture. I also intend to have small-scale traders form CBOs,” he said.

Owino further revealed that he will focus on intensive agriculture.

“I will revive cotton growing, establish new cotton ginneries while rehabilitating existing ones across the county. I plan to also ensure we have cold storage facilities and put up fish processing factories in Siaya along the beaches,” he said.

If elected, Owino says he will restock Lake Kanyaboli and ban fishing in the oxbow lake for six months.

“Do you know if we have a million fish in Lake Kanyaboli, which I consider the largest pond in the country, and stop fishing for 12  months, we can raise Sh4.8  billion in just one year if we sell the fish at sh400 each?" he said.

He said this was more than the amount of money the Siaya government receives quarterly from the national government.

Chris Owala, the executive director of Community Initiative Action Group, a civil society organisation based in Nyanza, said although the concept advanced by Owino was ideal, it wasn't implementable in Kenya's setup.

"This approach cannot work in a country where a majority of voters are poor. People who are struggling to access basic needs like food can not contribute towards a campaign kitty," he said.

Owala said leaders must first fix the country's economy so that wealth can be created.

"There is also a feeling that those who are seeking office through election are only doing so to enrich themselves. Voters should have a feeling that electing a leader will ensure they get services," he said.

"People need roads, water, health facilities, schools and electricity. Leaders should ensure these services are provided to motivate voters to see the need to take part in the electoral process," he said.