For years, farmers have been facing exploitation by middlemen from neighbouring countries

•The machine imported from India is expected to boost rice production in the Lake Basin region.The company deals with paddy processing. 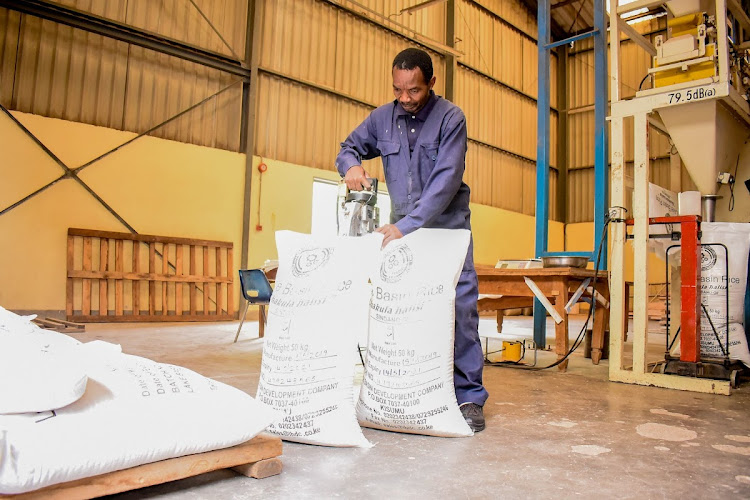 The government is installing a Sh65 million rice milling machine at the Lake Basin Rice Mill, a subsidiary of Lake Basin Development Authority in Kisumu.

The machine imported from India is expected to boost rice production in the Lake Basin region. The company deals with paddy processing.

For years, farmers have been facing exploitation by middlemen from neighbouring countries. Middlemen, especially from Uganda, mostly buy paddy even before it is ready.

Owidi on Monday said the installation of the machine is underway and is expected to take a month and a half.

“The shipping of the machine was delayed by the Covid-19 pandemic. We had ordered for it in December 2018,” he said.

Rice farmers in Western Kenya hope the machine with a crushing capacity of four tonnes per hour will create ready market and boost their income.

Joseph Ochieng, a farmer at the Ahero Irrigation Scheme, said the upgrade will open more income opportunities for farmers.

Owidi said it was cost ineffective since the cost of production is high and its spare parts difficult to get.

This, he said, made rice from the company uncompetitive.

“The new machine is more efficient and cost-effective. It will increase rice uptake from farmers,” the chairman said.

With the new machine, Owidi said cases of inefficiency will be fully addressed, thereby increasing the rice crushing capacity.

“We will be able to take more rice from farmers and explore more markets as we will be capable of serving the market efficiently,” he said.

LBDA last year targeted to buy 1,600 tonnes of rice but this was not achieved because of the inefficiency of the old machine.

“We could only take what we could crush to avoid post-production loss,” Owidi said.

LBDA also does third party milling for individual farmers and institutions such as National Cereals and Produce Board, the Kenya National Trading Corporation, Kodiaga and Kibos prisons.

The major customers include learning institutions such as Maranda High School, Maseno University and prisons.

At the rice mill, grade one products like Pishori and Sindano (non-aromatic) rice are being sold to retail outlets at Sh200 and Sh100 per kg respectively.

Grade two is sold in 50kg to institutions. Other products are Bran meal, chicken feed and husk. The LBDA pays farmers within a week of delivery.

The rice mill had dropped its production capacity.

On November 22, 2019, LBDA managing director Raymond Omollo said the upgrade is meant to address food sufficiency and nutrition in line with the government’s Big Four agenda.

He said production capacity will increase from 1.1 tonnes to 3.5 tonnes per hour after a new mill is installed.

"Our aim is to improve our crushing capacity to be self-reliant and create job opportunities for youths in the region," Omollo said.

Besides revamping the mill, Omollo said they are focusing on increasing the area under rice in the region for food sufficiency by providing farm inputs and extension services to farmers.

“Because of the aging machine, the company has had to spend a lot in production in terms of labour and electricity costs and other related costs, pushing production costs high,” Omollo said.

He said the cost of production will drastically reduce when the new machine is installed and will make the company's products more competitive in the market.

Omollo said the interventions are geared towards improving productivity at farmer level and efficiency in milling to enhance profitability both at the farm and the mill.

"This achievement will result in an immense contribution to the sustainability of rice agribusiness, poverty alleviation and food security goals," Omollo said.

The initiatives being put in place by LBDA together with the proposals in the next phase of the National Rice Development Strategy (2019-29) are expected to address most of the challenges facing rice production in Western Kenya.

The company also remains committed to restoring the confidence of farmers to continuously deliver paddy.

Farmers are paid per kilogram of paddy delivered based on the variety. For IR and eater- white rice costs Sh37-Sh38 per kilo, while Pishori and Basmati fetch Sh65 to Sh68 depending on the area.

Rice is considered one of the major contributors to the realisation of food security in the country. Its demand has grown at more that 12 per cent per annum compared to wheat at four per cent and maize one per cent.

Rice farming faces a number of problems that require urgent solutions, key among them being low level use of certified rice seed, fertiliser and poor farm mechanisation.

These problems are responsible for low yields and high cost of production which ultimately make local rice more expensive and less competitive than imports.

In 1986, LBDA commissioned a study that revealed a huge potential of rice production in the region through irrigation as well as under rain-fed conditions in the Lake Victoria region.

Construction of a rice mill in 1993 with automatic facilities for cleaning, drying, milling and grading was the answer to the cry of rice farmers in the region.

Upon commercialisation in 2010, the LBDA rice mill complex specialised in processing and sale of high quality graded rice, both aromatic and non-aromatic, branded as Lake Basin Pishori Rice and Lake Basin White Rice.

The new mill is expected to reduce production costs, labour expenses as well as other operational costs due to the advantages of efficiency and economies of scale.

Like the majority of rice millers, LBDA relies wholly on rice farmers within the Lake Basin region to supply the raw material.

The arrangement poses the major challenge of quality control of the raw material and competition for paddy with neighbouring countries due to trade liberalisation.

The milling recovery rate, which is currently at 57 per cent as opposed to the optimal level of 69 per cent to 72 percent, is primarily a function of grain factor and machinery factors.

The grain factor is determined by the agronomic practices and post-harvest handling at the farm level.

The challenge has in the past left the authority with few options besides relying heavily on the efficiency of its machinery and the effectiveness of its marketing team to deliver to the market competitively priced products of high quality.

With the government’s goodwill and support of the rice value chain, it is anticipated that through the National Rice Development Strategy, most of these challenges will be addressed.

The authority is working towards adopting a two-pronged approach including paying more attention to the farming operation to ensure the availability of quality raw materials at competitive prices.

LBDA in collaboration with other stakeholders is working closely to enlighten and educate farmers on the importance of using certified rice seed, fertiliser, and farm mechanisation and provide them with rice varieties of high quality.