Ruto: It's time for Raila, Uhuru to back my bid for President

'Sadly these two people have been hammering me despite helping them get jobs' - Ruto.

• He said while he has been hard at pushing the bottom up economic model, Uhuru and Raila have been pushing for constitutional change.

• He took a swipe at Raila, saying he was happy that leaders who have been against his church donations have also started going to church. 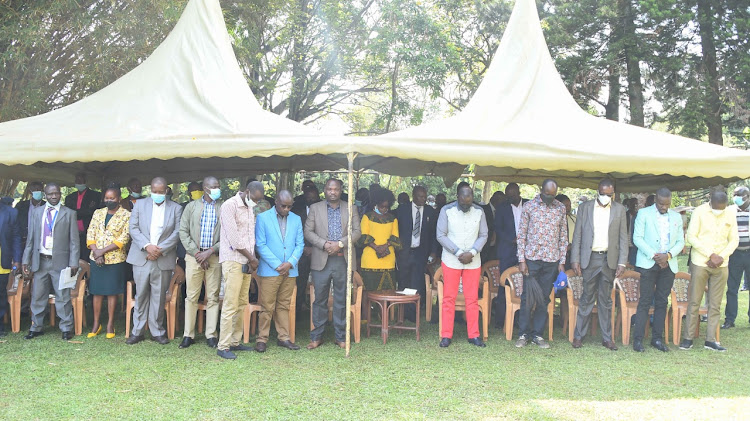 Ruto said while he was the ODM deputy party leader, he supported Raila in the 2007 General Election and helped push him to be the Prime Minister. He also said he helped Uhuru win two terms in Jubilee party.

“Sadly these two people have been hammering me despite helping them get jobs because I also want to help common hustling Kenyans get jobs and better lives,” Ruto said.

He spoke in Awendo town on Saturday when he was hosted by Migori Governor Okoth Obado and a host of county and national leaders to drum up support for his 2022 presidential bid.

Ruto gave a Sh1 million contribution for the construction of Awendo Central SDA church, Sh1.4million for 48 boda boda groups and Sh500,000 for women traders in Awendo town in a move he said will help build hustlers.

“I have been told off for helping hustlers in my campaigns, but as an economic agenda, I will set aside Sh120 million annually in each constituency in the country when elected just to help boost businesses of hustlers,” Ruto said.

He said while he has been hard at pushing the bottom up economic model, Uhuru and Raila have been pushing for constitutional change through the failed Building Bridges Initiative to distribute positions among themselves.

“We can’t have leaders pushing through change of the Constitution each time to add prime minister positions after elections, this time we need to first push through an economic agenda for all Kenyans and not just a few leaders,” Ruto said.

DP to preside over church fundraiser before a meet-the-people tour of Awendo town.
News
2 weeks ago

He took a swipe at Raila, saying he was happy that leaders who have been against his church donations have also started going to church.

“All leaders have shifted to church and that is the best matter because I have preached to them and they have seen the light, we must first seek God and others desires will be added and be blessed as a country,” he said.

Obado said he decided to support Ruto "because the country needs peace, unity and good brotherhood", adding he will ensure that Migori and Nyanza are not left out in forming the next government.

“This will not be the last time you will see Ruto in Migori, he will continue coming until we are part of a God chosen leadership. Time has come to end divide and rule and balkanizing sections of the country,” Obado said.

His sentiments were shared by Kuria West MP Mathias Robi  who said Migori and the larger Nyanza were ready to work with Ruto “to ensure we are part of the next government.”

South Mugirango MP Sylvanus Osoro said Raila has been using the same  formula in a bid to win the presidency.

Kiharu MP Ndindi Nyoro said Nyanza should join other Kenyans in supporting Ruto’s presidential bid because “he is  peaceful and runs an agenda based politics.”