• Tension has been brewing in Migori town after Wanjigi landed in Kisumu on Wednesday. 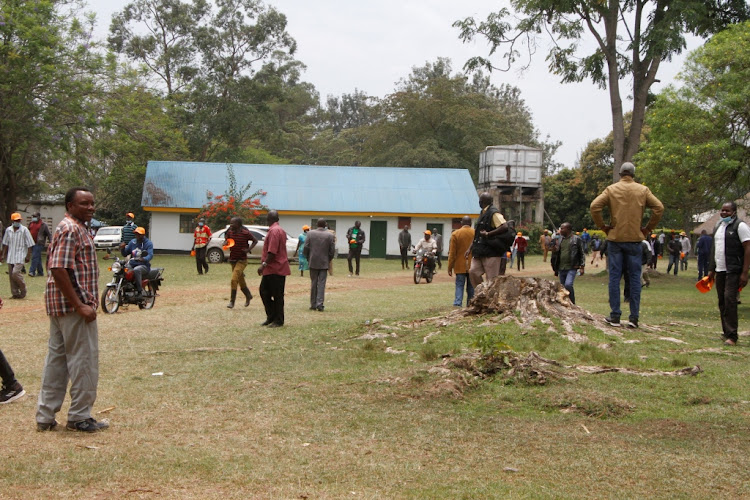 A meeting of Orange Democratic Movement party presidential aspirant Jimmy Wanjigi in Migori town on Friday failed to happen as youths clashed at the venue.

Wanjigi was to meet party delegates at Maranatha Faith Assemblies Church hall in Migori town when youths armed with stones and other crude weapons invaded the venue beating delegates who were seated.

Window panels and chairs were broken, blood spluttered on the floors and walls as chaos broke, forcing police to lob teargas canisters at the gathering to prevent further destruction.

“We were contracted to offer a venue for a peaceful meeting of ODM delegates who wanted to meet Wanjigi at our hall, after chaos broke out we have terminated the meeting immediately,” Reverend Joshua Ater, who manages the venue told the press.

Ater, had to officially terminate the meeting, with angry youths standing by to confirm the move before they could leave the venue, saying Wanjigi was not going to have any meeting in the county.

“Because of the chaos caused by rowdy youths who appeared to be ODM delegates, we have terminated the meeting they may seek another venue,” Ater said.

Later on, Wanjigi's efforts to address residents atop a vehicle were thwarted after a section threw stones at him. He had to seek cover in the vehicle as the driver sped off.

At about 2pm, Wanjigi's motorcade which tried to snake its way through Migori town was stopped at Posta grounds as a group of youths on foot and motorbikes threw stones on the busy Migori-Kisii highway.

Several vehicles had their windows broken, side mirrors smashed and  dents as youths on motorbikes chased the motorcade for about four kilometers to Namba junction outside the town.

It forced the motorcade to pick an alternative route outside the town to avoid Migori town center.

Says he's looking to make national cake bigger, rather than focusing on sharing it.
News
1 month ago

Tension has been brewing in Migori town after Wanjigi landed in Kisumu on Wednesday and met ODM party delegates in Kisumu and Homa Bay counties.

On Tuesday, Migori county ODM chairman Philip Makabong’o who is the secretary for Nyanza county, sent a terse statement against Wanjigi’s meeting.

“The national office is not aware of the visit by any guest to the Nyanza region and any member participating in such a programme is doing so at a personal level,” Makabong’o said.

Youths who invaded the meeting venue led by Suna East ODM secretary Samuel Obrien and county youth leader Eric Opany, said they invaded the  venue because they did not want Wanjigi to be "misled".

“We love Wanjigi too much to allow him to be messed by protocol in Migori, the same people who were organising his meeting in Migori with fake ODM delegates have been causing us sleepless nights by organising meetings for DP William Ruto’s UDA delegates,” Opany claimed.

Obrien said they will not allow conmen to organise Wanjigi’s meeting and insisted that “we have not chased Wanjigi away, but he should follow protocol and come with party officials.”

The two claimed while millions of shillings were released to organise the meeting, youths ended up getting only Sh200.

However, delegates said the chaos was caused by senior ODM officials in the county who planned from the word go never to have the meeting to take place.

“We have people in Migori who feel they have more rights in the ODM party, people who already think they have ODM party certificates even before primaries. We feel agitated,” a delegate said.