• The Kakamega Governor said he strongly feels that Orengo is better off being a senator than being a governor.

• “We need his political skills and knowledge of national politics, which is very crucial to us in the next year's general elections,” Oparanya said. 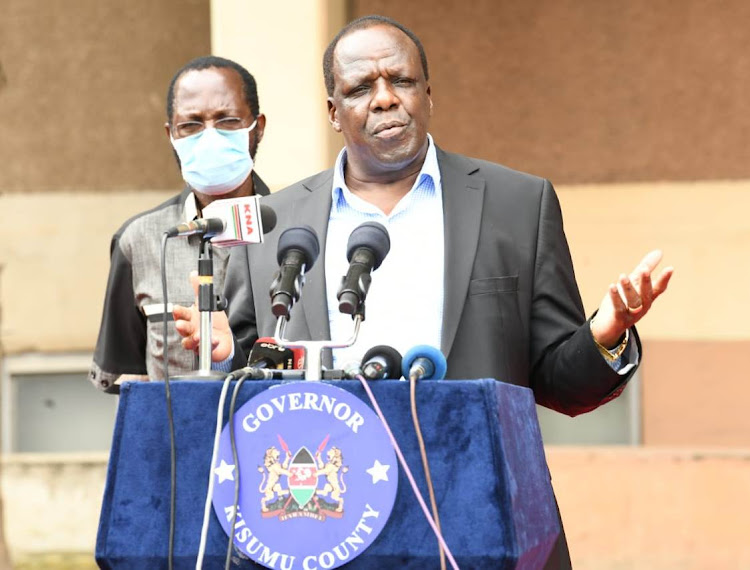 Senator James Orengo should shelve his ambition to become Siaya governor in next year's general election and instead focus on national politics, ODM deputy party leader Wycliffe Oparanya has said.

Oparanya, who is the Kakamega governor, on Tuesday said he strongly feels that Orengo is better off being a senator than a governor.

Orengo is keen to succeed Cornel Rasanga, who is serving his second and last term as county boss.

But Oparanya said the senator will be best placed to support ODM party leader Raila Odinga and other senior members at the national level.

“We need his political skills and knowledge of national politics, which is very crucial to us in the next year's general election,” Oparanya said.

He attended a radio talk show in Kisumu. Oparanya said personal interests might have informed Orengo's decision to seek the governorship.

“I have told Orengo and it is on record that he is better off being senator at the national level. But as you know, politics is about personal interests,” Oparanya said.

The governor said he is a close and good friend of the senator and both of them are committed to the party. He urged the veteran politician to rethink his decision.

“You remember the other time when they (Orengo and Rarieda MP Otiende Amollo) had a problem with the party? I had to intervene. I had to put them together with Baba (Raila ) and the problem was resolved. Otiende was reinstated to his committee seat,” Oparanya said.

He was referring to the events of four months ago when Orengo and Otiende were criticised for their stand on the BBI following their demands that some sections be amended in Parliament.

Oparanya says governorship is so demanding given it is a hands-on job.

“I have been a governor for the last nine years and being a governor, especially in the rural areas when you’ve been staying in Nairobi for a long period all your life, becomes very tricky,” he said.

"Sometimes you have to sit down for 14 hours trying to resolve issues and go through papers.”

In February, Owino said he is the best candidate for the job, adding that anyone who goes up against him will become irrelevant politically.

Owino hinted he could contest under the ODM party ticket, a move that could complicate matters for others.

Orengo is the Minority leader in the Senate, while Wandayi is the ODM secretary for political affairs. Both are close allies of party leader Raila.

Raila faces a delicate balancing act as he tries to manage loyalty, popularity, ambitions and egos. Siaya is his rural home county.

Orengo has been on record cautioning residents against electing people who have not been tried and tested, saying the current politics need brave leaders.

"Politics is very tricky. It needs tolerance. It is unlike government jobs, there is defeat, victory and all manner of things,” he said.

He, however, called for peaceful campaigns to allow Siaya voters to decide.

In 2018, Gumbo told Orengo to forget about being Siaya governor come 2022. He said residents will not allow Orengo to swap positions with Rasanga as has been allegedly proposed by a section of leaders.

He said the gubernatorial and senatorial positions in the region were neither a retirement option nor a preserve of a few individuals.

Gumbo said Siaya must move forward and shun individuals with selfish interests who want to take over the county’s top leadership positions.

He accused Rasanga of dismal performance, adding that the county’s leadership has not been focused on initiating development projects to improve lives.