The construction works started last week in earnest with locals expressing confidence that it will massively boost trading activities in the region.

• Koyoo urged more funding for the roads and that the project be expedited as the current state undermines access to learning, healthcare facilities and businesses.

• He attributed the development goodies witnessed in Muhoroni and the country at large to the peace initiative between President Uhuru Kenyatta and ODM leader Raila Odinga. 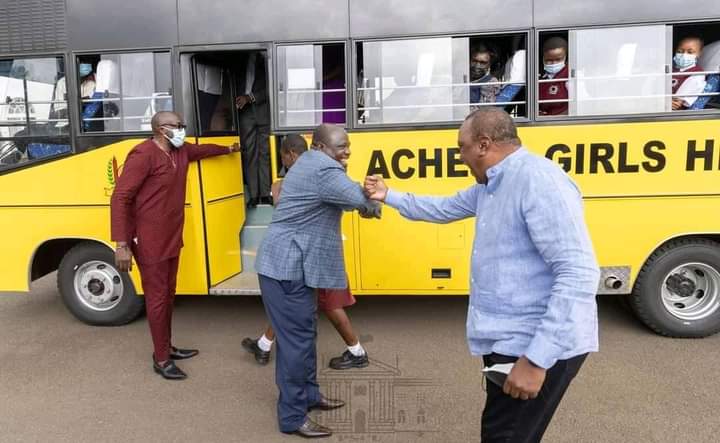 Muhoroni MP Onyango Koyoo and President Uhuru Kenyatta during the donation of school buses to 10 schools on Friday. Achego Girls High School from Muhoroni was among the beneficiaries.
Image: PSCU

The construction of the Sh4.9 billion Mamboleo-Muhoroni road in Kisumu has started.

The road has been in dilapidated condition for years.  The works started last week in earnest, with locals expressing confidence that it will massively boost trade in the region.

Muhoroni MP Onyango Koyoo has lauded President Uhuru Kenyatta for expediting the construction of the road, which has been a nightmare to residents.

He urged more funding for the roads and that the project be expedited as its current state undermines access to learning, healthcare and businesses.

In 2018, President Kenyatta, during a tour of Kisumu and Siaya counties, announced the tender for construction of the road had been awarded. Koyoo thanked the government for awarding the tender.

The 63-kilometre road that traverses Kisumu, Nandi and Kericho counties has been in a pathetic condition for decades.

Healthcare, learning, business and investment have been disrupted by transport challenges and many livelihoods lost.

Motorists avoided the road and opted for the Kericho-Kisumu road, going through Awasi and Ahero. They had been complaining of huge losses incurred while repairing their damaged vehicles.

The MP attributed the development goodies witnessed in Muhoroni and the country at large to the peace initiative between President Uhuru Kenyatta and ODM leader Raila Odinga.

The handshake between Kenyatta and Raila has ensured peace in the country, he said.

“Because of the existing peace, Kenyans are able to do their daily activities without fear or interference. The duo are true statesmen and value this nation,” Koyoo said.

He called on Kenyans to remain steadfast in supporting Uhuru and Raila in their efforts to unite the country.

The sugar belt road is divided into three lots and awarded to three construction companies.

It would then progress through Miwani, Chemelil and Muhoroni, eventually terminating at Kapsitet junction, where it joins the Kericho-Kisumu road.

The project includes the dualling of the Mamboleo intersection, service lanes, pedestrian walkways and street-lighting.

A seven-metre single carriageway near the Great Lakes University section will also be constructed, with two-metre wide shoulders on the entire stretch. It will also have service lanes, pedestrian walkways and the provision of street lighting around the area.

The road will reduce travel time between Kisumu, Nandi and Kericho counties, thereby ensuring faster accessibility and delivery of services.

The road will boost food security, trade and livelihoods upon completion.

Koyoo, who on Friday met President Uhuru Kenyatta in State House, Nairobi, said he has utilised the handshake opportunity to initiate development activities within Muhoroni constituency.

He was accompanied by students, board of management members and Achego Girls High School principal Millicent Odhiambo to receive a bus President Uhuru donated to the school.

“We thank the President and the [former] Prime Minister for the bus and other development projects he has initiated in Muhoroni because of the good political will in the country,” Koyoo added.

Uhuru donated a school bus to Achego Girls, a pledge he made last year when Matiang’i presided over the fundraising for the construction of a dormitory at the school.

The head of state visited Muhoroni twice and pledged to initiate new projects and complete the ongoing ones.

During the State House trip, Koyoo said Kenyatta promised to fulfil the pledges he made to the people of Muhoroni.

Koyoo noted that millions of Kenyans depend on the sugar sector for their livelihoods either directly or indirectly.

“I have presented a memorandum on roads and sugar industries to the president and other projects Muhoroni constituents want to be implemented and he pledged to look into them,” he added.

He, however, told off those taking credit for projects initiated by the national government.

“Let us stop making unnecessary noise at funerals. All that our people need is developments that are capable of improving their livelihoods and not chest-thumping,” Koyoo said.

Achego Girls principal Millicent Odhiambo thanked President Uhuru and Koyoo for what she termed love for the girl child.

“The bus will help our girls. We have a big population of 1,300 girls and we really needed this bus. The girls are very excited. So we thank the President for what he has done for us,” she said.

“We need land more than any other thing for the expansion of infrastructure in the school. Our infrastructure is overstretched, but with the support from the major stakeholders, Achego will go to greater heights.”

The head of state also donated 2,000 re-usable masks to each of the schools as part of government efforts to tackle the Covid-19 pandemic.