Construction authority had ordered work stops in May.

• Musau said the authority stopped the works after it was established that the building did not meet safety and other construction standards. 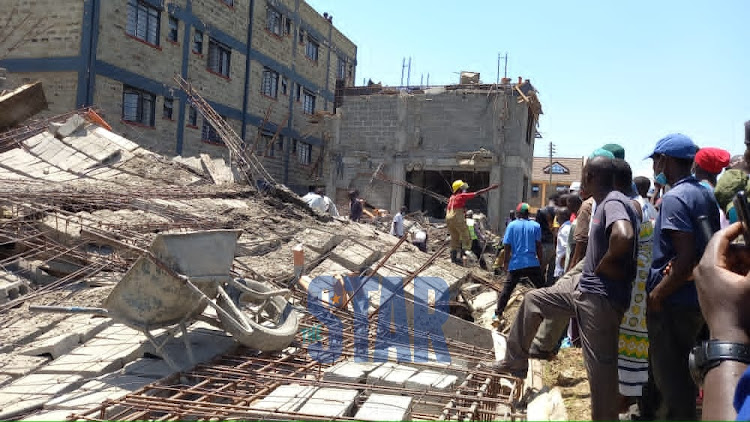 Two bodies have been retrieved from the rubble following the collapse of a two-storey building in Kisumu's Mamboleo estate.

This, as it emerged the National Construction Authority had stopped the construction of the building that collapsed on Monday.

At least three people are believed to have been trapped under the rubble.

Musau said the authority stopped the works after it was established that the building did not meet safety and other construction standards.

However, it was not clear why workers continued working at the site four months after the NCA directive.

Building inspectors from the authority and those from the City's planning department are known to frequently visit construction sites to carry out routine inspections.

"The building was inspected twice and the last time our officers were at the site was in May. We had directed the developer to stop construction," the NCA official said.

One of the victims, pulled out of the rubble had her right hand clutching steel.

Jared Odhiambo, a survivor, said the victims were members of the same family.

"A man and two women were trapped under the rubble when the weight of the floor came down," Odhiambo said.

They brought food to the construction workers, according to the survivor.

" I was on the other side of the building when it begun shaking. Within seconds, the building came down," Odhiambo said.

It was not clear how many workers were at the site at the time of the tragedy with estimates being put at 60. The workers were doing slab casting. Several workers were rushed to various hospitals within the county.

The owner of the building was reportedly among those who were taken to hospital.

Another survivor who sought anonymity said the developer was at the site at the time of the accident.

"He was here monitoring the progress and taking pictures," he said.

Efforts by teams from the county government of Kisumu, Red Cross, NCA officers and the police to rescue those trapped under the rubble were hampered by lack of appropriate equipment.

An excavator that was used by the rescuers was donated by the workers who are building the Kisumu Mamboleo Road.

The construction site was not sealed off as required. It did not have signage that show name of the developer and the contractor implementing the project.

The house stood on swampy ground not far from the meter gauge railway line.