1,500 delegates convene in Nyanza to endorse Raila for president despite ban on gatherings

• The conference was themed the 'Oyugis declaration'.

• Delegates resolved to reject the politics of tokenism. 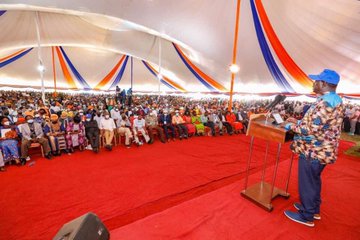 About 1,500 delegates drawn from Kisumu, Siaya, Nyamira, Kisii, Homa Bay and Migori gathered at Sikri Technical College for a conference that gave the ODM supremo the green-light to go and look for support from the rest of Kenya.

This, despite President Uhuru Kenyatta announcing the suspension of all public gatherings for 60 days following rising Covid-19 cases.

The conference concluded with a raft of resolutions being ratified, top among them was the region's decision to continue supporting the Building Bridges Initiative.

Dubbed the 'Oyugis declaration', the conference also resolved that henceforth, the region's politics will revolve around growing Nyanza's economic development.

The resolutions read by Senator Sam Ongeri (Kisii) also resolved to reject the politics of tokenism that they said has perpetually condemned the area's youths to hustler's brigade.

The leaders further pledged to ensure Nyanza remains consolidated behind Raila to enable him to focus on mobilising support outside the region.

Senators, governors and their deputies, MPs and MCAs drawn from the six Nyanza counties witnessed the opposition leader begin his next bid from his political home.

Raila's latest move that saw him retreating to his political bedrock is seen as an attempt to ring-fence the region from his opponents who are already jostling to penetrate the opposition stronghold.

Convenors of the Sikri conference took the opportunity to further popularise the Azimio la Umoja initiative.

Speaking at the conference, Raila announced that the party had suspended the planned regional Town Hall meetings.

"We met with the medical experts who advised against having public gatherings. However the government directives came late after the convenors of today's meeting had made preparations which were almost complete, " Raila said.

He vowed to continue with his decision to preach peace and unity across the country.

Raila said the unity quest for Kenya will be fruitless if not cascaded down to the regions.

He took the opportunity to thank residents of Nyanza for embracing peaceful coexistence over the years despite being affiliated to different political persuasions.

"Our next move will be to turn this peaceful coexistence to a vehicle that will help bolster economic progress of the region," he said.

The opposition leader at the same time urged Nyanza residents to use the lessons learned during Covid-19 to build resilience that will make them economically self reliant.

"So far, we have only been scratching just the surface in regards to production of food crops. We can take advantage of the immense natural resources in the region to turn around our economic fortunes, " he said.

He said there was need to come up with strategies that will help to uplift the economic well-being of the rural women of Nyanza.

The opposition leader spoke of the need to revive the collapsed sugar industry , coffee and tea sub sectors and other agricultural investments. He said it was a pity that most of the industries in Nyanza have been stalked by poor management.

"The fishing industry is greatly under exploited, with persistent cases of harassment in Lake Victoria. We need to maximize the utilization of the lake as resource in Marine transport and blue economy, " he said.

ODM leader says he is building a gigantic movement for the Promised Land.
News
9 months ago

On the health sector, Raila noted that there was need to pull resources together to have a robust health care system as a region.

" We are vulnerable as a region due to regional policies. To address this, our hospital facilities should be made ready to handle various health challenges, " he said.

Ongwae said the Kisii community was represented at the conference to confirm that they have endorsed Raila and as a show of solidarity towards his bid for the presidency.

The governor said the people of Kisii were grateful for the development projects initiated in the area.

"We are with you. We have a voting population of over 1 million which will back you. We have lived together with our neighbors from Luo community which will continue uninterrupted," he said.

The peaceful coexistence between the two communities, he said, begun way back during the fight for the country's independence.

He said that the party's performance in the recent by-elections held in the area had confirmed unwavering support for ODM by the residents.

" We are happy about the handshake and we want the people from other regions to unite. We want all the presidential hopefuls to feel free and visit Nyanza to ask for support," he said.

Ongwae said Raila was the best suited to protect the gains of devolution.

" When people sit on the table looking for how to distribute the national cake, do not forget them," he said.

He suggested that Raila should work closely with the leaders from Kisii led by interior CS Fred Matian'gi.

Azimio la Bomas: Is it really a fresh start for Kenya?

Insofar as BBI team is concerned, the “problem of Kenyans is not in the hardware but the software”.
Siasa
2 years ago
by DICKENS WASONGA AND ROBERT OMOLLO
Nyanza
19 August 2021 - 15:55