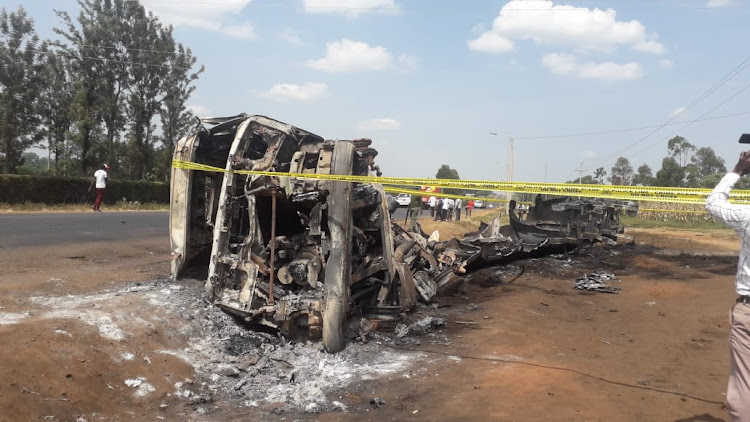 The wreckage of the fuel tanker that exploded in Gem, Siaya county
Image: FAITH MATETE

The death toll from the Siaya tanker tragedy has risen to 17, police in the county confirmed on Tuesday.

Two of the victims of the Malanga accident that happened last Saturday along the Kisumu-Busia highway succumbed to burns on Tuesday morning.

On Monday, two other victims of the tanker explosion died while undergoing treatment at the Siaya county referral hospital.

"Four victims of the Saturday accident who were being attended to at the county referral hospital have succumbed to the injuries bringing the total number of deaths to 17 people,"  Gem subcounty Police commander Charles Chacha said.

According to the OCPD, the two victims who succumbed on Tuesday include a 14-year-old boy whose parents are yet to be traced. He had 71 per cent burns on his body.

The other victim is a 19-year-old woman who was six months pregnant. She suffered 90 per cent burns.

Chacha told the Star that an inquest had begun over the accident with DCI detectives from Gem subcounty leading the exercise.

Siaya county police commander Michael Muchiri Nyaga said a team of experts have begun collecting DNA samples from the bodies and matching it with those of the relatives to help with identification.

"The team started this process on Tuesday at the referral facility. We don't want people to pick bodies that don't belong to their kin and burry them," he said.

The county police boss said it is only after the exercise is concluded that families will be allowed to pick up already identified bodies for burial.

A part from the victims who succumbed to their injuries while at the hospital,  bodies of the 13 people who died on the spot were burned beyond recognition according to the county commander.

The Saturday night accident happened after a tanker which was ferrying petrol burst into flames along the  Kisumu- Busia road in Malanga area.

Chacha said the accident occurred at around 10:45pm as a trailer registration number KAV 768  was  avoiding a head on collision with another oncoming trailer from Kisumu.

Twenty nine people, including children escaped with serious injuries from the fire and were taken to various hospitals.

"The trailer which was ferrying 20 tonnes of milk veered off the road to avoid plunging into another trailer," he said.

The OCPD said the fuel tanker rolled emptying it's content by the roadside.

Members of the public, oblivious of the lurking danger rushed to the accident scene to siphon fuel.

"Moments later, the fuel tanker burst into flames. We have counted at least 13 bodies at the scene. All the casualties were taken to the nearby Yala subcounty hospital for treatment," he said.

Other witnesses claimed that the villagers were scrambling to collect cartons of milk from the lorry when the trailer ferrying fuel exploded.

It took three hours to contain the inferno with help of the fire brigade from Busia county.

On Monday, Siaya governor Cornel Rasanga announced that his administration had waived the hospital charges for the victims and will avail support to their families.

He also noted that a memorial park will be erected in Sidindi in respect of the Saturday tragedy and the victims of a similar incident that happened along the same highway in 1998.

Rasanga further revealed that a campaign to sensitise residents on the dangers of fuel siphoning will be aggressively carried out by his government in collaboration with Kenya National Highway Authority.