The county will save at least Sh2 million per Kilometre

•The claycreate offer new technology in road maintenance which can sustain road condition between 5 to 10 years. 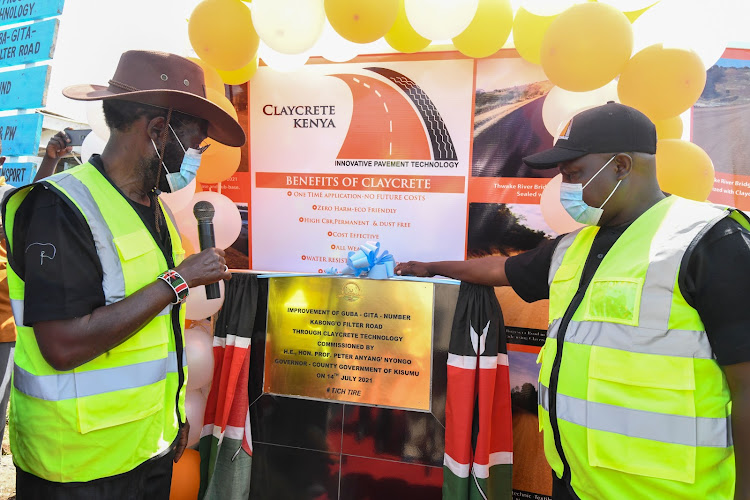 The claycrete offers new technology in road maintenance which can sustain road condition for between five and 10 years.

Before, the county was undertaking repairs almost every year.

Nyong’o said they will adopt the technology to build and maintain roads within the county.

He spoke on Wednesday while launching road maintenance of the 7.5km Guba- Gita–Number Kabongo filter road through claycrete technology.

The road- the first to benefit, will be completed in one month.

With the new technology, the county will save at least Sh2 million per kilometre.

Under ordinary rates, it costs at least Sh4 million to do 1km of road.  The new technology will however reduce the cost to Sh2 million.

Even when being repaired after 10 years, no murram will be required on a road made of the claycrete technology.

“The old murram will be re-compacted and used.  This will save the environment and labour,” Nyong'o said.

Claycrete technology was developed in 1996 to meet the demand for fast and effective road stabilisation in tropical and highly humid environments.

“It is certified by the world body SGS as non-harmful and classified as not hazardous to transport,” Nyong’o said.

“Therefore, claycrete is not a dangerous commodity and can be used in protected natural environments.”

The technology increases the stability of the road and it shall be used to maintain other identified roads within Kisumu.

The technology, developed in Brazil, has been successfully used in Australia and Rwanda among many other countries.

“We also intend to use the technology in many other roads across the seven subcounties,” the governor said.

“While we continue to open new roads, our prime focus now is road maintenance, especially in the rural areas using the Kisumu Roads Maintenance Teams,” he said.

He said the county has developed a policy on road maintenance teams as envisaged in his manifesto for the county.

“The policy outlines the legal framework, policy principles as well as governance and financing arrangements for the programme,” he said.

“The recruitment process for the Kisumu County Road maintenance teams is ongoing.”

Nyong’o said his administration has also expanded and rehabilitated the rural road network within the subcounties and in the last financial year, a total of 250km of roads were maintained and 12 no-box culverts constructed.

The county targets to maintain 350 km of rural roads during the 2021-22 financial year.

The governor said the construction of Ahero interchange and Kisumu Boys-Mamboleo road spearheaded by the national government are currently on course.

The contract of tarmacking the 63km Mamboleo-Miwani-Chemelil-Muhoroni- Kipsitet road is being finalised.

The road will reduce travel time between Kisumu, Nandi and Kericho counties thereby ensuring faster accessibility and delivery of services.

Kisumu will host the Africities conference in April 2022.

The event that is set to take place at the Mamboleo showground will be a platform to grow not only Kisumu but also the entire Lake Region Economic Bloc and Kenya at large. The summit will place Kisumu on the world map, Nyong'o said.

He said the county in collaboration with the national government has revived the infrastructure within the showground by the construction of road networks.

He also cited the construction of Jomo Kenyatta International Stadium and recently launched a construction convention centre worth Sh1 billion ahead of the summit.