Two gang members in Kisumu arrested, police warn the rest to shape up or perish

He warned any outlawed gang to shape up or be ready to perish.

• Locals have accused the group of terrorizing traders, torturing and extorting money from their victims. 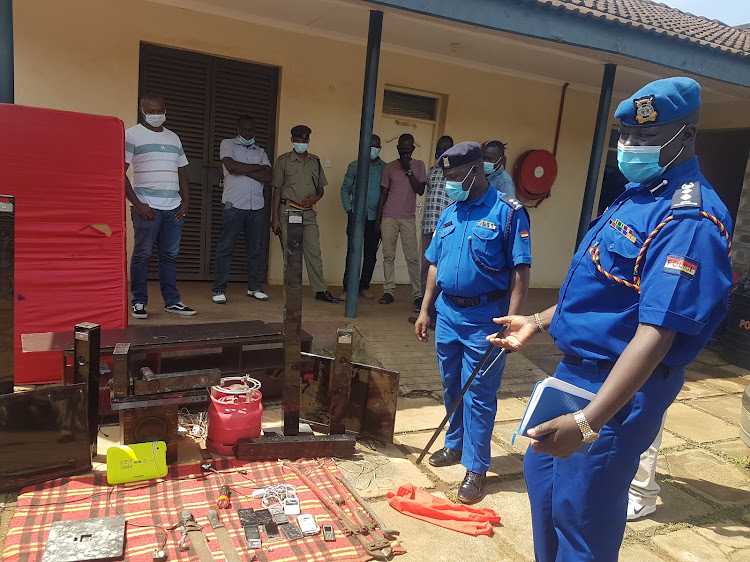 Police in Kisumu have arrested two members of a gang who are allegedly behind the criminal activities in the City.

Other members, including their ring leader Oliver Jaoko famously known Olivetti who are on the run, are being pursued.

Locals have accused the group of terrorising traders, torturing and extorting money from their victims.

Ng'etich said the group has been using force, intimidation and threats against residents for selfish gains which cannot be allowed.

He warned any outlawed gang to shape up or be ready to perish.

“We cannot allow a few individuals to terrorise residents, cause chaos and instability in Kisumu. You will not commit crime and get away with it. Their days are numbered,” Ng'etich warned.

He added, “We are very firm and will deal with criminals accordingly. We are going to use the machinery we have to ensure there is security in Kisumu.”

The police boss said the security team is ready and willing to provide security to residents of Kisumu.

He, however, called for support from members of the public.

Ng'etich noted that security is not only for police but a collective responsibility from all the stakeholders.

“If they have information they should be ready to volunteer such to senior police officers such as OCS, OCPD and county police commander to help maintain law and order. That information will be treated will confidentiality,” he said.

He noted that so many young men who have finished school and want to make it quick in life through criminal activities.

“This group wants to own best phones and nice clothes yet they don’t have money, thus leading the to crime. Such earthly demands should not make them to engage in criminal activities to fulfill their dreams,” Ng'etich said.

Earlier in the morning, irate members of public stormed the building, where the group usually trains and helped the police to nab two members.

“We are tired of threats, torture and intimidation by the gang. Enough is enough,” a woman who sought anonymity said.

The group is also accused of masquerading as county officials and part of criminals who recently marked structures for demolition.

The city has been issuing notices on illegal structures and building extensions within the city with the aim of restoring order and sanity.

On Monday, acting Kisumu City manager Abala Wanga said some criminals have taken advantage of the notices and started marking various structures within the city for demolitions.

"Our attention has been drawn to a few unknown individuals who are masquerading as city officials and are marking structures for demolitions as witnessed along Apindi Streets, Nyamlori and Garissa lodge areas," noted the City Manager Abala Wanga.

Abala stated that the city management is not responsible for marking structures for demolitions along Apindi Street, Nyamori and Garissa lodge hence the notice for demolitions  in the areas should be regarded as false.

He said this is an act of hooliganism that will not be tolerated by the city management and the county government at large.

Abala noted that the city management will work tirelessly to ensure that those responsible for this act face the full force of the law.

"We therefore appeal to traders and the citizenry at large to remain vigilant of these people who are out to serve their self - interests," he noted.

Wanga said the incident caused fear amongst the traders after structures were marked by unknown person as set for demolitions.

“This is not the first time such activities. When we started demolitions of illegal structures, there were several fake notices spread across social media,” he said.