• Major streets such Oginga Odinga, Jomo Kenyatta Highway and Ang'awa were all flooded. Other affected areas include backstreets and main Bus Park. 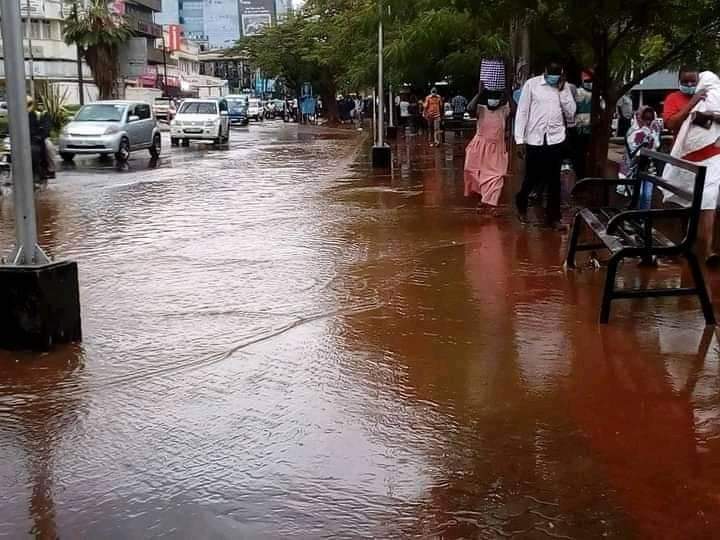 The Kisumu county government has reassured residents of its commitment to address the flash flood in the city’s CBD when it rains.

This comes after the CBD experienced massive flash flood due to heavy downpour on Monday evening.

Major streets such Oginga Odinga, Jomo Kenyatta Highway and Ang'awa were all flooded. Other affected areas include backstreets and main bus park.

Some of the hotels and shops were marooned. The City has been experiencing flash flood when it rains due to blockage.

The county has also blamed flash floods to structures built on drainage system.

Residents however claimed that the flooding has been occasioned by the ongoing projects in the City.

Estates such as Migosi, Manyataa, Nyalenda, Obunga, Carwash and Kondele were also flooded due to the heavy rains.

He said a team of engineers including those from the city, Kisumu Water and Sanitation Company and those overseeing ongoing projects have been mandated to immediately establish the cause of the flooding.

“We are expecting them to give us an expert opinion and best way forward on how to resolve the flooding menace permanently,” Wanga said.

He said the report will then be handed over to Governor Anyang Nyong’o for swift action.

Wanga also appealed to residents especially experts to join hands with the county in addressing the drainage system in Kisumu.

“We welcome fruitful advise from our people to help in the problem we are facing,” he added.

The county has been demolishing structures erected on top of drainage and sewer lines in its efforts to tackle the flash flood.

Several illegal structures and buildings have been brought down by the county government in the City and estates to pave way for the reorganisation of the City’s infrastructures.

Wanga assured that drainage will permanently be solved upon completion of the ongoing development projects in the city.

Met warns of flash floods in Mandera, Marsabit and Wajir

Aura said this will take place from today to May 1.
News
2 weeks ago
by MAURICE ALAL Correspondent, Nyanza Region
Nyanza
04 May 2021 - 21:57