THREATENED TO KILL HER

Sega cop ordered her to clean offices as punishment and then ambushed and sexually assaulted her. 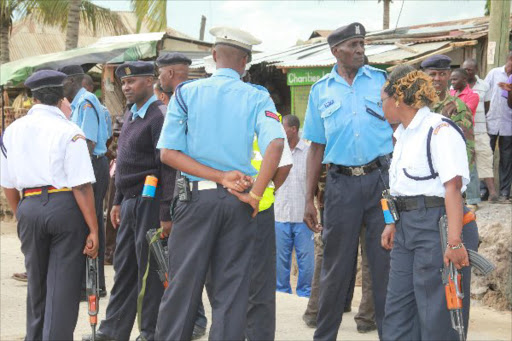 Judith (not her name) is pursuing justice. On Monday morning, she and her eight-year-old son left their rental house in Sega to go to the shop.

She had just relocated to the small town from Nairobi and needed to buy some household items to begin a new life away from the city.

Having bought the goods, mother and son walked back to their house not far from Sega police station. She had no idea what would soon befall her.

"We were past the gate to the police station when a policeman in uniform summoned me," she said.

The 32-year-old woman was immediately arrested for violating Covid-19 protocols. She did not wear a face mask.

Instead of being thrown into the cells, Judith said a duty officer asked her to clean the station's corridors, an office and the toilets as punishment for the offense.

"I was instructed by the officer to wash the rooms and the other areas then leave," she said.

Her son was directed by officer to sit on a bench outside the report office.

There were no other members of the public at the station except a few officers in uniform within the compound.

"I began to mop the corridor but the officer asked me to instead clean one of the offices adjacent to the cells," she said. It was around 8.30am.

"He showed me the room and walked out, leaving me to clean the office that had a metal box, two chairs and a table," she said.

After a few minutes, she said, the officer walked back to the room and closed the door behind him using one of the chairs. Everything happened fast.

"He grabbed me and pinned me down after overpowering me. My brief struggle with him was useless. He put his gun down and told me not to dare scream. He threatened to kill me if I made a noise," she said.

Judith claims the officer raped her.

"I was too scared to scream. He left me behind to dress up," she recalled.

She stepped out but, she said, because of fear she did not report to the other officers. Instead, she picked her son and left the station in a hurry.

She was too confused to think about her next move.

"Once out of the station, I rang my husband who is in Nairobi and narrated my ordeal in the hands of the officer," she said. She then went to a hospital in Sega town.

"I was examined and given some drugs to take because he didn't use protection, " she said.

But, strangely, she said, the clinical officer who attended her asked her not to take up the matter with the police.

"He told me not to report the incident because I couldn't win against the police," she told the Star on Thursday morning.

But that same day at around 2pm she decided to report the matter to Ukwala police station.

"The officers at the report desk refused to record the incident in the Occurrence Book. They asked me to go to hospital and be checked," she said.

It was after Judith went back to the station on Tuesday that the report was recorded by the OCS Ukwala.

"I was again asked to go to the hospital, for the third time, for re-examination. I wasn't issued with the P3 form although I recorded my statement about the incident," she said.

On Wednesday afternoon the woman was asked to report at Ukwala police station to identify the police officer who raped her.

This was after investigators probing the incident took away the clothes she wore on that particular day of rape.

"Fourteen officers, all in uniform, were paraded for the identification. I picked him out. And it was later confirmed that he was the officer who was on duty the morning I was raped," she said.

Siaya county police commander Francis Kooli on Thursday confirmed that detectives from DCI had launched investigations into the matter.

He said the identification parade was conducted on Wednesday evening at Ukwala police station as part of the probe.

"We are investigating the alleged incident and the lady has since recorded her statement," he said.

Kooli said once the file is complete, it will be handed over to the office of the Director of Public Prosecutions.

"We will do our part as required and involve experts in regards to evidence collection and preservation. Then we will hand over the file to ODPP for further advice," he said.

He, however, did not say whether the officer had been arrested or not.