• Kennedy Okong’o, a member of Nyatike Agri-Business Self Help Group, said they have over 5,000 bags of paddy and 800 bags of milled rice at their warehouses.

• On January 6, Anthony Nalianya, the principal business development officer at KNTC, wrote to the group and eight other schemes across the country to request suspension of rice collection as directed by the President. 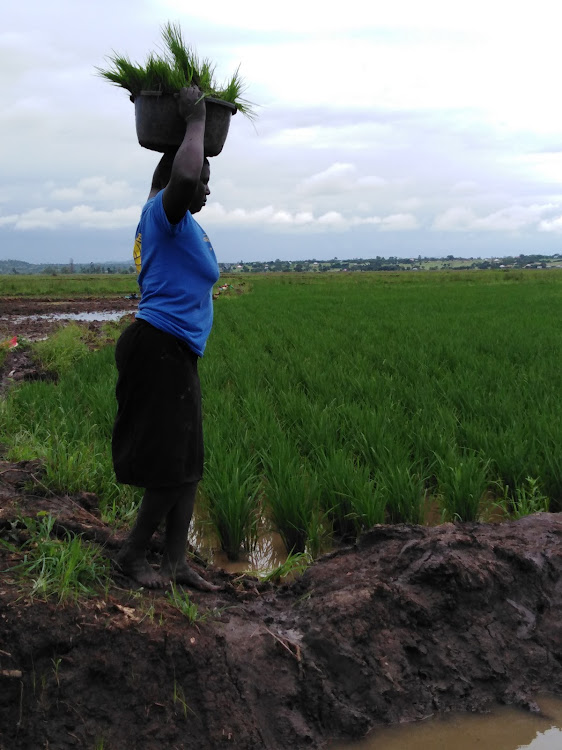 Rice farmers at the Sh4.07 billion Lower Kuja Irrigation Scheme have complained about government neglect that has seen them stuck with harvests in their homes and warehouses.

Last year, President Uhuru Kenyatta instructed the Kenya National Trading Corporation to buy rice from farmers across the country, but since January, buying of rice stalled at the scheme situated along River Kuja in Nyatike.

Kennedy Okong’o, a member of Nyatike Agri-Business Self Help Group, said they have over 5,000 bags of paddy and 800 bags of milled rice at their warehouses.

Okong’o, a large-scale farmer, said he is also stuck with more than 1,000 bags of rice at home from his own farm.

“What the government did was to start an irrigation scheme as a public relations gimmick and left farmers out of it to fend for themselves as we are stuck with our produce,” he said.

On January 6, Anthony Nalianya, the principal business development officer at KNTC, wrote to the group and eight other schemes across the country to request suspension of rice collection as directed by the President.

“The corporation is acknowledging your efforts as far as the presidential directive is concerned; however, due to limited storage at our warehouse occasioned by huge stocking and slow off take, we are unable to take in more bags at the moment,” the letter read.

Okong’o said, "We only had six LPOs given out to the corporation and they each required 560 bags of rice to be supplied for the whole scheme, while we have single farmers who can produce the 560 bags at ago.”

The scheme has over 3,000 rice farmers who said even when the corporation was taking rice there was still surplus left, with current stalemate worsening an already bad situation.

Most have threatened to ditch the project as they don’t have capital and the National Irrigation Authority has slowed down infrastructure development, with most land laying fallow.

Kennedy Ouma, the Lower Kuja Irrigaaation Scheme manager, on Wednesday told the Star on the phone that most farmers are stuck with their produce. He, however, said that has nothing to do with most paddies lying fallow.

"The corporation scaled down on rice uptake. Most farmers are still stuck with the crop which is affecting the new planting season but that is not why most land is fallow,” he said.

Ouma said because of continued attack on paddies by diseases, the scheme and farmers agreed to have rotational cropping to avert losses as high as 80 per cent.

“We recently opened over 2,000 acres, but because of yellow molt virus, we scaled down. But at Block A, we have cultivated 1,100 acres and at Block B we have 800 acres ready for this season,” he said.

Ouma said there is a challenge of marketing of Kenyan rice among buyers in the country and that has not only hurt Nyatike them but also farmers in other schemes across the country.