Researchers say weeds accounts for maize yield losses of up to 182,227 tonnes per year which translates to Sh.5.3 billion annually

After 12 years of research, the Kenya Agricultural and Livestock Research Organisation on Friday announced the development of the bio-herbicide that kills the weed.

The research was conducted in collaboration with Montana University of USA and other partners. 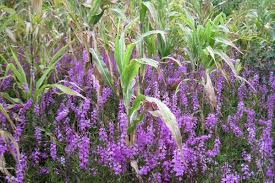 Kalro has developed a herbicide to kill the invasive striga weed that has been for decades blamed for poor maize and sorghum harvests across the country.

Striga weed is amongst the worst threats to food security in sub-Saharan Africa.

After 12 years of research, the Kenya Agricultural and Livestock Research Organisation on Friday announced the development of the bio-herbicide that kills the weed.

The research was conducted in collaboration with Montana University of USA and other partners.

The development makes Kenya the first country in the world to develop the herbicide.

It is applied during planting and improves farm productivity, profitability and food security.

Speaking in Kisumu where he unveiled the new product known as ‘Kichawi Kill’, Kireger said research organisation had already obtained a registration status of the bio-herbicide.

He said the registration status was granted last week by the Kenya Pest Control Products Board.

The trials for the product started in 2008 and were conducted in Busia, Siaya, Vihiga and Bungoma counties.

"Farmers will need only 2.5kg of the biocontrol product to treat one-acre farm of maize, sorghum or millet,” Kireger said.

A kilogram of the product costs Sh120 and after three seasons of treatment, the farm will be free from striga infestation.

Tooth Pick Company, a social enterprise based in Kakamega that wasn incorporated to undertake commercialisation of the product has since trained farmers in 42  villages where the trial was conducted.

The parasitic weed can cause up to 100 per cent yield loss by attacking the roots of staple crops such as millet, cowpeas and upland rice, resulting in food insecurity and lack of income.

In Western region alone where the weed is common, striga has infested over 217,000 hectares of land, Kireger said.

“This has led to maize yield losses of up to 182,227 tonnes per year which translates to Sh.5.3 billion annually.”

Kireger noted that the existing striga management technologies have not been widely adopted by farmers due to mismatches between the technologies, socio economic conditions, effectiveness and availability.

"The fungal strains increase virulence through the production of specific amino acids that harm the weed and not the crop,” Nzioki said.

With the product fully approved for use after undergoing stringent standards of safety and efficacy, researchers expect that its rapid adoption by farmers will help to reduce the negative impacts of striga and improve food security.

“This project is an excellent example of a public-private partnership," Kireger said.

Post a comment
WATCH: The latest videos from the Star
by DICKENS WASONGA
Nyanza
13 March 2021 - 12:05
Read The E-Paper