They say increase of funds allocated to the counties will enhance development in the region and Kenya. 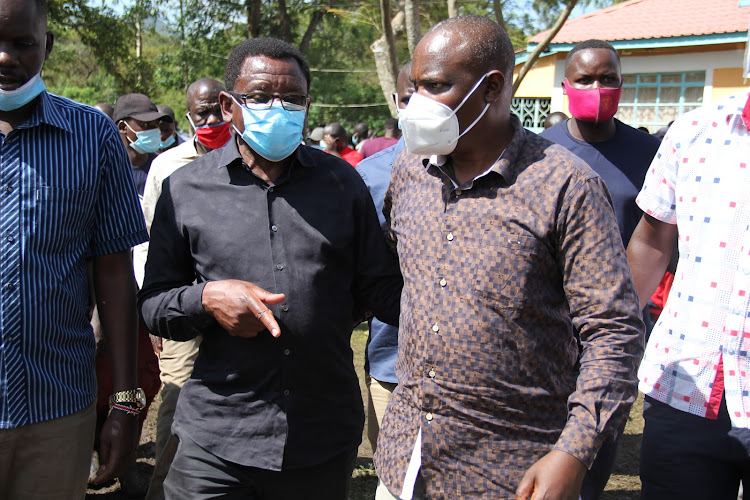 CAMPAIGN: Minority leaders in the Senate and National Assembly James Orengo and John Mbadi at the burial of Josiah Odhiambo in Kilogi ward, Ndhiwa constituency, on November 27, 2020
Image: ROBERT OMOLLO

Nyanza politicians want residents to speedily append their signatures in support of the Constitutional Amendment Bill, 2020 to pave way for a referendum.

They argued that most of the amendments suggested in the Building Bridges Initiative report will benefit residents and the majority of Kenyans.

Orengo argued that the economic development and transformation many Nyanza residents have been yearning for will be realised should they approve the Bill.

He said increase of funds allocated to the counties is one way the Bill will enhance development in the region and Kenya.

“Let’s append our signatures in the books faster so we close the referendum chapter before June next year. We want to start benefiting as soon as possible,” Orengo said.

Addressing mourners on Friday during the burial of Josiah Odhiambo, brother to MP Owino at Malela village in Kologi ward, Ndhiwa constituency, the ODM party leaders told residents to ignore politicians opposed to the BBI.

The Senate Minority Leader criticised DP President William Ruto and his allies for opposing the constitutional amendment process by putting too many demands.

He accused DP Ruto of opposing the government from within.

“We should avoid leaders like DP Ruto who opposed the handshake from the beginning. They have their own vested interests,” he added.

He argued that many Kenyans support the BBI due to the benefits it will bring, adding that its only those who don’t want economic progress for other regions who are opposed to the document.

“Let electoral agency (IEBC) not delay Kenyans in approving the signatures. We should end issues of signatures within two weeks and go to the county assemblies,” Mbadi said.

Kajwang' told residents to focus on the benefits, which the BBI report will bring instead of talking about non-issues.

He said Nyanza residents will not be left out among the big five positions created in the BBI.

“You shouldn’t be dragged down by minor issues such as the number of constituencies we’ll have. Let’s look at the bigger picture,” Kajwang' said.

“There is no team which can win a war when it’s not united,” Odhiambo.