•The houses located in Milimani estate are under the Kisumu city management. 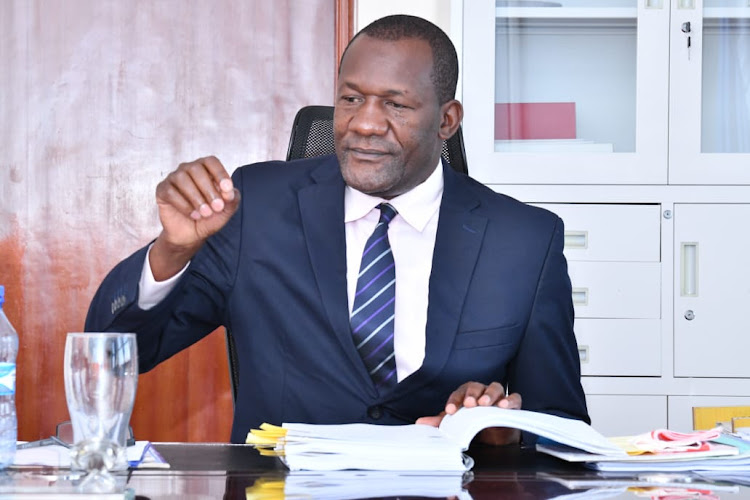 The houses located in Milimani estate are under the Kisumu city management.

The county has said Midiwo and Outa owe it Sh876, 000 and Sh1.7 million respectively.

However, Midiwo said he has no issue with the county government over the house.

He said he stopped paying rent because the house is in a "deplorable condition". "We had agreed with former city manager Doris Ombara that they repair the house or I repair it myself in lieu of rent," Midiwo said.

"Last week, the city management sent engineers to assess the house. The roof is leaking. The servant quarters roof was blown off by the wind," Midiwo said.

Ouya said he was given that house in a dilapidated condition. “It had no roof and was abandoned. I used Sh4.8 million to renovate it,” he said.

He added, “Our agreement was that they deduct Sh50,000 every month until the Sh4.8 million is exhausted then from there I will start paying rent.”

Ouya said the county should refund him the money minus the claimed rent arrears if they need the house. “I am not going anywhere,” he said.

In a letter dated October 7, Midiwo was given seven days to ensure payments are done, failing which, tenancy will be terminated.

“This contravenes clause 2 (a) of the tenancy agreement and hence liable for eviction and to institute legal action against you to recover the full amount,” reads the letter.

Okeyo has accrued rent arrears of Sh5.4 million according to the notice of eviction dated October 8, 2020, and signed by the acting city manager Abala Wanga.

“Our record indicates that you have not been making payments regularly since you occupied the premise,” reads the letter.

It further reads, “This contravenes clause 2 (a), and 5 (a) of the tenancy agreement and hence liable for eviction and to institute legal action against you to recover the full amount.”

"….This letter serves as firm notice to vacate the above-mentioned premises not later than Monday, October 12, 2020, also refer to the court decree issued on March 5, 2020”.

Okeyo did not pick calls or reply to a text message sent to him.

Wanga said, “Take note that failure to comply by the date state in this letter will lead to forceful eviction and any damages incurred at your cost without any further reference to you.”

A letter dated October 13 to Outa reads, "You have not made any payments since you occupied the premise and accrued rent of Sh1.7 million."

The letter added that, "This contravenes clause 2 (a) of the tenancy agreement and hence liable for eviction and to institute legal action against you to recover the full amount."

But Outa denied owing any rent arrears. He said he renovated the house with his money based on the agreement with the city and quotation from the city engineers.

"It is the city that owes me more than Sh6 million I used to renovate the house. The documents are there to prove such," Outa said.

The city manager said the notice has elapsed and urged tenants to vacate by Friday or face eviction.

“Even in your own houses nobody can stay without paying rent accruing to millions of shillings. Just vacate peacefully. These monies should be used to improve services to residents,” Wanga said.

Outa said the county was to deduct Sh50,000 monthly from the money he spent for renovation. “If the amount is exhausted then I will now pay rent,” he said.

Wanga said the county is committed to repossess all the county houses for renovation. Some of these houses are in a poor state and need refurbishment.

Wanga also issued notice to city staff to vacate the houses by November 30, 2020. He said some tenants have sublet the houses.

“The houses are earmarked for renovations ahead of the 2021 Africities Summit in Kisumu. Some of the houses will be used as offices and guest houses for delegates,” he said.

He confirmed that six notices of eviction have been issued to those with rent arrears. “We want to modernise these houses to benefit the city and residents at large,” Wanga said.