DEVELOPMENT AS A GIFT

Says projects implemented by the national government will immensely improve the living standards of the residents.

•The governor said Uhuru is committed to fulfilling the development agenda to better the lives of Kisumu people.

•He said Kenya has experienced peace and tranquility following the handshake between Uhuru and Raila. 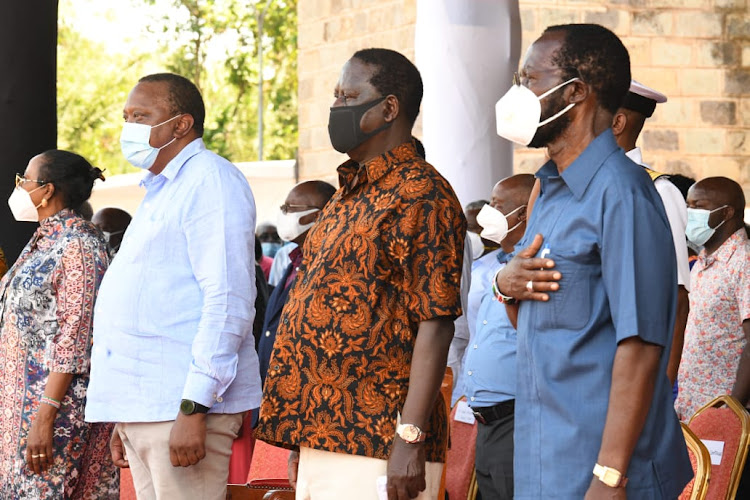 He said the projects implemented by the national government will immensely improve the living standards of the residents.

Uhuru, Nyong’o said, is committed to fulfilling his development agenda to better the lives of Kisumu people.

“Kisumu hosted the President accompanied by Raila and a host of Cabinet Secretaries on Thursday and we are happy with the outcome of the visit,” Nyong’o said.

He said Kenya has experienced peace and tranquility following the handshake between Uhuru and Raila, which is healthy for economic development.

The governor thanked Uhuru and the former Prime Minister for visiting Kisumu to tour ongoing projects.

He said the cordial relationship between his administration and the national government has seen the implementation of various developments.

Other projects lined up for Kisumu include a special economic zone in Muhoroni subcounty and blue economy and the 63km Mamboleo-Muhoroni road construction. Uhuru directed that the road be completed by April next year.

The Sh32 billion multipurpose Koru-Soin dam is also underway. The implementation of the multipurpose dam is funded by the national government through the National Water Harvesting and Storage Authority.

Nyong’o said Uhuru and Raila were committed to revamping the Kisumu port and the Nakuru-Kisumu railway to boost regional trade.

The businesses that rely on the railway will thrive and create opportunities for youths upon the completion of the project, Nyong'o said.

"We are fully supporting Uhuru and Raila who are focused on fostering unity and development across the country. They have shown us that Kenya is bigger than an individual," he said.

“We acknowledge the goodwill of the President for giving the Kisumu government the money for construction of the complex,” Nyong’o said. He said the complex will be ready for opening in April next year.

The port, Nyong’o said, is due for opening soon with various business activities that have been going on at the facility. So far, he said  MV Uhuru has transported 20 million litres of fuel to Uganda via the Kisumu port.

“We expect more business from the port once the jetty in Jinja is inaugurated by the government of Uganda,” Nyong’o said.

He noted that the good relationship between the two levels of government has created a conducive environment for planning for the 2021 Africities summit in Kisumu.

“The summit will create massive opportunities for the people of Kisumu and beyond. I want to assure the nation that the planning is progressing well under the national steering committee commissioned by the President,” Nyong’o said.

He praised Raila for his commitment to unite the country and commitment towards the economic growth of the region.

“He has always gone out of his way to ensure facilitation of our requests to the national government. His contribution to the achievement of these projects shall forever remain in our minds,” Nyong’o said.

He also lauded the Kaazi Mtaani programme which has empowered thousands of youths to cushion them against the effects of coronavirus. In Kisumu, more than 5,000 youths have benefited from the initiative.

Kisumu county Commissioner Josephine Ouko said the railway and port, among other projects, are essential for development in the region.