They say it is high time Kenyans got services and transparency in the use of resources. 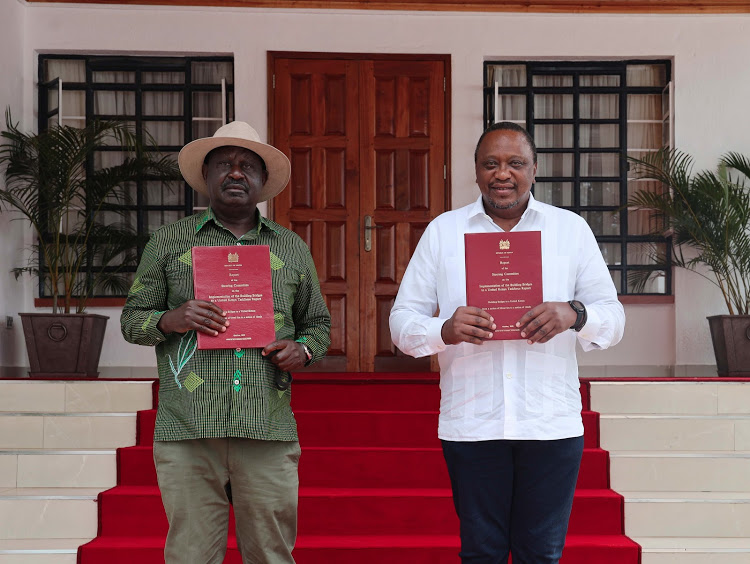 Some Nyanza leaders have called upon President Uhuru Kenyatta and ODM leader Raila Odinga to ensure the BBI solves the country's major problems once and for all.

They said it is high time Kenyans got services and transparency in the use of resources by the national and county governments.

President Kenyatta was in Ikonge market, Nyamira county, where he commissioned the Kisumu-Chepilat road, after which he addressed residents at Ikonge PAG Primary School.

Raila rubbished claims that the BBI was meant to create positions for some people in government. He said that is politics without direction, adding that the BBI movement was unstoppable.

“Avoid this propaganda that you are hearing around that the BBI is meant to create positions for some individuals. The BBI is meant to have more resources in the counties, not creating positions. We want to do way with divisions of hatred and nepotism. We want Kenyans to emulate the Tanzanian slogan of undugu (brotherhood),” Raila said.

He told off DP William Ruto over the 'hustlers' narrative, saying he (Ruto) was not a hustler but using the narrative to play around with the lives of young people.

“Some people are saying they are hustlers. How do you say you are a hustler when you use helicopters to come and donate wheelbarrows to suffering youths and say you are one of them? You are not,” the ODM chief said.

"Now that Kenyans are united, we have decided to work with the President and the ODM leader Raila Odinga to ensure our country develops," Orengo said.

He told off leaders who are against the President and Raila's handshake deal, saying they should respect the unity of the two leaders.

“We will not allow some leaders to undermine the BBI. We are dealing with resolving Kenya’s problems once and for all. We used to be against the President when the ODM leader lost elections but now we are behind the President wherever he goes,” Orengo said.

Nyamira Deputy Governor Amos Nyaribo said those opposed to the BBI are against development in the counties.

“We need to support the BBI so we can develop. We will not have time for those who are against this noble idea of ensuring our counties develop."