Officials plan to open offices in all eight constituencies of the county. 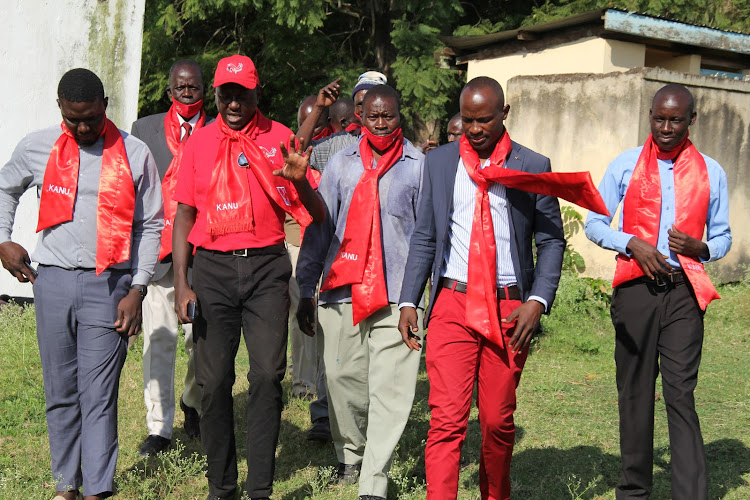 Kanu is taking advantage of the handshake between President Uhuru Kenyatta and ODM leader Raila Odinga to revitalise its activities in Homa Bay.

The Independence party remained dormant for about 18 years after President Daniel arap Moi retired in 2002.

Since that time, ceased to have operational offices in Homa Bay. The majority of residents have been supporting political parties headed by Raila.

But on Saturday, Kanu officials met in Homa Bay town and opened an office to mark the beginning of revival of the party.

The ceremony was attended by county Kanu chairman Ken Okul, his deputy Sarah Omollo, secretary Roney Orako, secretary of the youth Fred Omollo and the chairperson of the women congress Lilian Achieng’.

Okul said they are taking advantage of Uhuru and Raila's truce to make Kanu vibrant again in Homa Bay as they prepare for the 2022 General Election.

Speaking to journalists after opening an office, Okul said they want the party to be as active as other political parties in Homa Bay since the truce has reduced politics of animosity.

“The handshake created a good political environment for leaders to work together. Kanu national chairman Gideon Moi supports the handshake, hence we’re reviving all our party activities starting from the grassroots,” Okul said.

He said opening offices in Homa Bay would enable the party to undertake its affairs effectively.

Okul added that they plan to open offices in all eight constituencies in the county.

“We cannot have a political party that does not have an office in our region. Homa Bay residents are urged to seek information about Kanu at our offices as we continue to strengthen the party,” Okul said.

Orako said opening of the office marked the beginning of their campaigns to register residents as member of Kanu.

They aim to get more than double the current party membership which stands at 11,000 in the county.

“We are urging residents of Homa Bay to register as Kanu members. We want the party to recover its vibrancy of the 1990s,” Orako said.

Omollo described Kanu as the only party that has posts for the youth and urged them join it.

He said the cockerel party is on its path of crowing again in Homa Bay.

He argued that most of the party officials in the county are young people who have fresh ideas on development.

“You don’t have to be 50 years old to hold a position in Kanu. This is the only party which does not discriminate against young people,” Omollo said.

He said the good relations between Moi and Raila will enable many Homa Bay residents to join Kanu.

Achieng’ said the recently launched online membership registration will make it easier for residents to register with the party using their phones.

“The online registration makes it easy for people to register as Kanu members. Let us make use of our phones to join Kanu,” Achieng' said.

Kanu will now compete with ODM, which is dominant in the county.

Post a comment
WATCH: The latest videos from the Star
by ROBERT OMOLLO
Nyanza
18 October 2020 - 22:00
Read The E-Paper