Preparations complete ahead of Mashujaa Day fete in Kisii

Celebrations at Gusii Stadium will be restricted to invited guests

• County commissioner Jaldesa said that all security measures have been put in place to guarantee guests' and residents' safety. 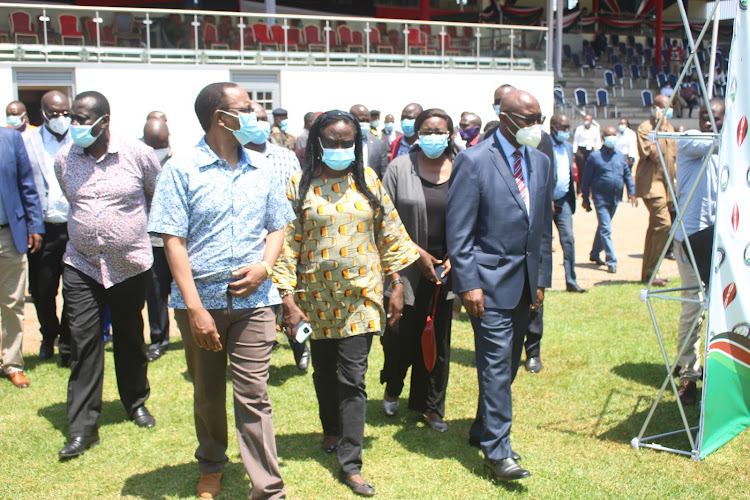 Kisii county has completed all the preparations for Mashujaa Day on Tuesday next week and is ready to play host, Governor James Ongwae has said.

Ongwae and county commissioner Abdirisack Jaldesa said the stage is set for the 11th Mashujaa Day celebrations to be held at Gusii Stadium.

“I want to assure all Kenyans that all is set for the event. We are ready to host the first national celebrations in Nyanza region,” Ongwae said.

The celebrations at Gusii Stadium will be restricted to invited guests. About 3,500 people will be allowed into the 20,000 capacity stadium, while 8,000 will follow the event live from Kisii Golf Course.

“We shall also beam the event live from screens, which will be mounted at various spots in Kisii town. All the Covid-19 containment measures will be put in place,” Ongwae said.

“I am proud to inform the county and national governments that they have been working closely to make the day a success. I want to thank President Uhuru Kenyatta for choosing Kisii to host the event. It’s a real honour for the people of Kisii. We have immensely benefitted from this and I support the idea of hosting the event out of Nairobi,” Ongwae said.

County commissioner Jaldesa said that all security measures have been put in place to guarantee guests' and residents' safety.

He said that security officers will be stationed at various points to ensure that residents conduct their activities in a peaceful environment.

“I want to assure all guests who will be attending the celebrations and residents that all security measures have been put in place to guarantee their safety,” Jaldesa said.

The commissioner said traffic officers have prepared a plan for all vehicles using Kisii-Keroka and Kisii-Kisumu roads to be diverted to avoid congestion in the Central Business District.

He said that key infrastructure especially bypasses, have been fully done to decongest the town during the major event.

Ongwae said that 4,500 hotel rooms have since been identified and have been placed on the county website to enable guests to locate them with ease.

On Monday, Interior PS Karanja Kibicho said he was impressed by the preparations.

Kibicho spoke at Gusii Stadium where he led the national celebrations committee on an inspection tour of key facilities, including the stage and State Lodge.