• In Nyando subcounty, seven out of 20 schools in Ahero were flooded by heavy rains and backflow from Lake Victoria between April and July.

• Kisumu county director of education Isaac Atebe said most of the learners were moved to the nearest schools. 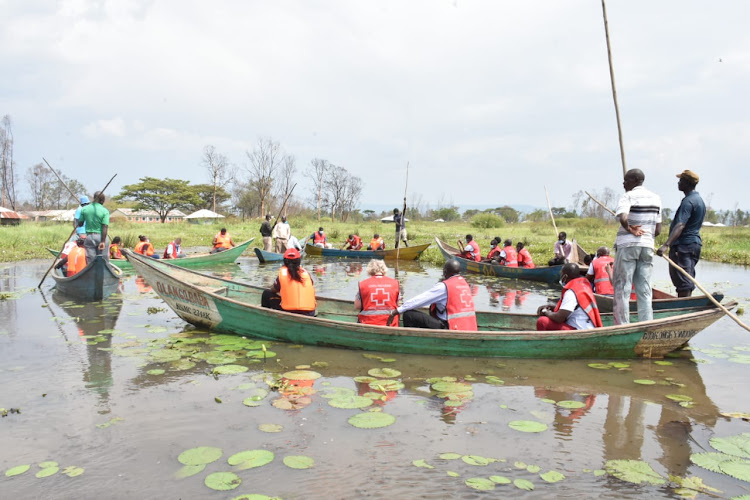 Some learners from flooded Nyando areas had to report to new schools as learning resumed in Kisumu county.

In Nyando subcounty, seven out of 20 schools in Ahero were flooded by heavy rains and backflow from Lake Victoria between April and July.

Kisumu county director of education Isaac Atebe said most of the learners were moved to the nearest schools.

On Monday, Form 4 students from Kandaria Mixed Secondary School were relocated to Nduru Secondary, while Standard 8 pupils from Kandaria Primary were moved to Ugwe Primary school.

Atebe said a stakeholders' meeting held on September 21 and chaired by the county commissioner drew the plan for how to move the learners.

"We communicated to the affected schools and told them to move to the alternative schools which are not far from where the affected ones are," Atebe said.

The education director said the head teachers of the affected schools have moved with their teachers and learners. He noted that the hosting schools have adequate space.

Meanwhile, learning resumed in other parts of Kisumu county, with management saying social distancing would be a challenge.

At MM Shah Primary School, 326 Standard 8 pupils had reported. Grade 4 pupils were still trickling in by mid-morning as the school management sought to create space for the over 200 pupils.

School head teacher Michael Okoth said social distancing was the biggest challenge at the school whose infrastructure is dilapidated.

With only 24 classrooms and a population of 3,000 pupils, alternative space will have to be sought before recalling the other classes.

At Pandpieri Primary School, 200 Standard 8 and 4 pupils reported out of 339 learners who were expected.

Head teacher Veronica Otieno said the low numbers could be a result of poor transport logistics, among other challenges.

“We have not achieved 100 per cent reporting on this first day. But we are hoping the number will keep on increasing day by day,” Otieno said.

At Victoria Primary in Kisumu town, there was 90 per cent turnout. Headteacher Edward Omala said learning began without hitches.

At the weekend, there were mixed feelings from stakeholders, with a section cautioning that the country is not well prepared.

Many Nyando residents were uncertain of the resumption of learning as many schools were still flooded.