Health services disrupted in Kisumu as workers stay away

Nurses' union says residents will continue to bear the brunt of strike if authorities do not act.

• The health workers began staying home on Thursday last week after their unions ordered sit-ins until their salary arrears are paid.

• Kenya National Union of Nurses deputy general secretary Maurice Opetu said the county government had failed to honour their end of the deal. 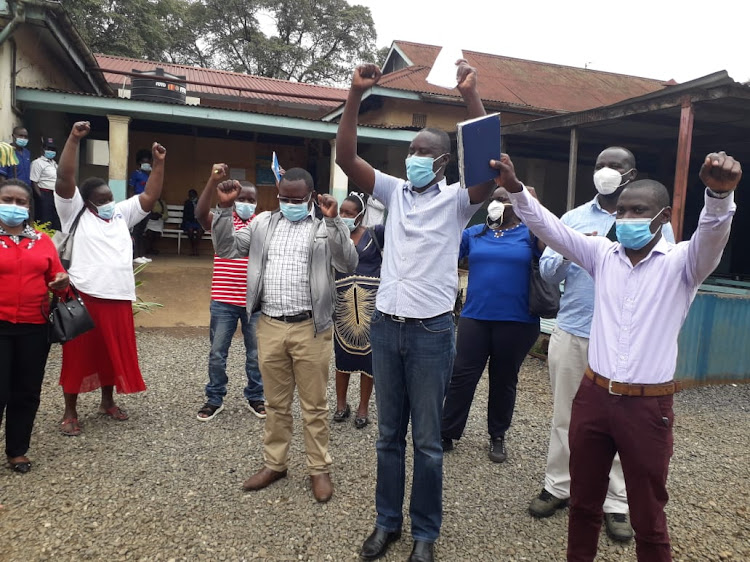 Health services in Kisumu were Sunday disrupted for the fifth day running after workers refused to report to duty as they demand salary arrears from as far back as March.

The health workers began staying home on Thursday last week after their unions ordered sit-ins until their salary arrears are paid.

Kenya National Union of Nurses deputy general secretary Maurice Opetu said the county government had failed to honour their end of the deal.

Opetu said that residents will continue to bear the brunt of disruption of health services as salary sit-ins go on.

The health workers also called upon President Uhuru Kenyatta to invoke Article 218 of the Constitution to form Kisumu Metropolitan City.

Opetu said they were reaching out to the President because the county government has failed in its primary obligation to offer crucial health services.

He said the idea of a metropolitan area just like in Nairobi will inject efficiency in the management and running of the affairs of Kisumu county.

But the governor's press director Aloice Ager told the Star that the county was working on how to sort out the problem.

A joint committee of the health workers' unions ordered members to stage sit-ins Thursday because the county government had failed to honour an agreement to pay funds owed by Wednesday. But because of Covid-19 regulations, the workers cannot stage sit-ins at their workstations.

Some have not been paid their salaries for the last three months and others up to six months, they said.

In a statement, the joint committee said medics had been working with an erratic and inconsistent supply of PPE by the employer.

They said persistent follow-up by their unions and a written commitment by the county government had been ignored by the employer.

County secretary Godfrey Kigochi, in an August 12 letter addressed to county chief officers; the director governance and administration; city manager; county attorney and the unions, said all July salaries would be paid in a week.

The workers' initial strike was halted by a Kisumu court, which had issued the county government an ultimatum to pay all pending salaries by August 19, failing which the health workers were at liberty to resume their strike.

Counties had initially cited challenges in remittance of salaries, with Sh29 billion released by Treasury two weeks ago expected to have eased the hitch.

Nairobi and Homa Bay are among counties that have reported disruptions in health services after workers went on strike.

Post a comment
WATCH: The latest videos from the Star
by FAITH MATETE Correspondent, Kisumu
Nyanza
23 August 2020 - 12:03
Read The E-Paper