Deputy Governor Joash Maangi says it will be prudent for politicians to read the document before telling Kenyans what should be done.

• Governor James Ongwae and other county leaders urged residents to read the report to understand it so that they can make an informed decision on its implementation. 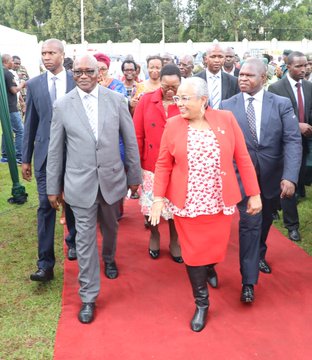 A section of leaders from Kisii yesterday urged residents to ignore propaganda being spread by individuals about the Building Bridges Initiative team.

Governor James Ongwae and other county leaders urged residents to read the report to understand it so that they can make an informed decision on its implementation.

They said that it is Kenyans who will make a decision about the report and thus gossip about it should be avoided at all costs.

Ongwae said that the proposals by the BBI team are good for the country to move ahead.

“I am urging our people to ignore propaganda that is being spread by some individuals and instead read the entire report and understand what the BBI team came up with,” Ongwae said.

The county boss said that the handshake between President Uhuru Kenyatta and ODM leader Raila Odinga has contributed to the end political tension which has been witnessed for a number of years.

“We need not politicise the report but instead as leaders, we should help wananchi understand it,” Ongwae told the Star on the phone.

Ongéra said that the report will make women more visible in leadership because those who will be running for political seats have to choose them as running mates.

“The report proposes that if a man runs for the presidency or governorship position he must choose women as a running mate,” Ongéra said in Kisii town.

She added, “The one third gender rule we have been fighting will now be achieved through the proposals.”

Maangi said it will be prudent for all leaders to read the document before telling Kenyans what should be done.

“We need to be realistic and tell our people what the report entails but not make comments before understanding it,” Maangi said.

Nyaribari Chache MP Richard Tongí said that the country has made tremendous progress since the March 2018 handshake and thus the report should not be taken for granted.