Nyong'o blacklisted me, I can't reach him on phone – Outa

Rift between Outa and Nyong'o widens. 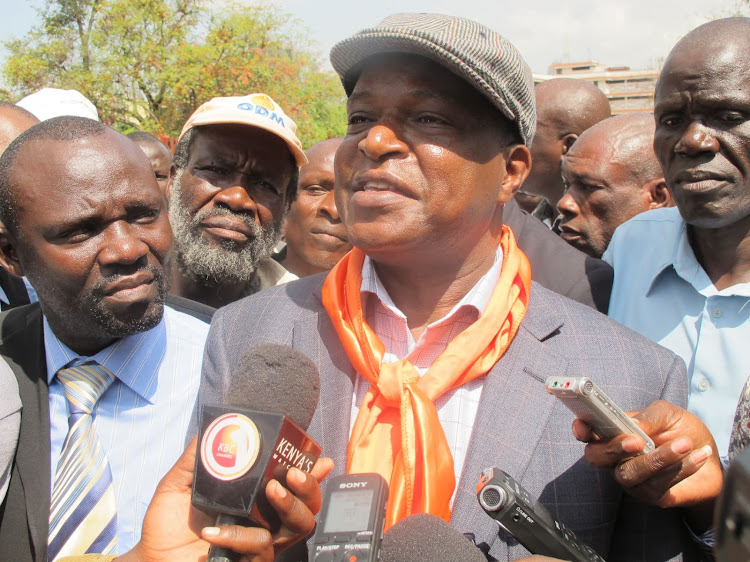 Kisumu Senator Fred Outa has said Governor Anyang Nyong’o blacklisted him following their disagreements on the management of county affairs.

Outa said he cannot reach Nyong’o on phone. “The last time I saw him was during the burial of his mother at Ratta village in Seme before he departed to Egypt,” Outa said.

He was speaking on Wednesday during an interview on Radio Mayienga. The senator said little was being done in the county in terms of development and accused Nyong’o of making numerous trips overseas.

Nyong’o, through his press unit director Aloice Ager, said Outa knows the governor's office and should walk in if he wants to talk to the county boss.

During our campaigns in 2017, Nyong'o accused his predecessor Jack Ranguma of making unnecessary trips abroad yet he is now doing the same thing, Outa said.

“He is doing the same mistakes for which we ousted Ranguma,” he said.

Outa is among those expected to run for the governorship in 2022. Nyong'o has indicated he will defend his seat.

Outa said they agreed in 2017 that Nyong’o would go for one term and support him to become his successor. The senator said a bid to extend Nyong'o's term will be met head-on.

But Ager said Outa has one vote and cannot determine who Kisumu voters will elect. “God willing, Nyong’o will seek the second term based on his leadership and track record but not what people say in funerals,” Ager said.

During the interview, Outa questioned the procurement process of a new governor’s car that was bought at Sh18 million.

The senator said the cost of the black Toyota V8 should be Sh6 million.

“Let him bring the balance of Sh12 million to residents," Outa said. Ager dismissed the claims as unfounded and untrue.

Outa also demanded that the money allocated for the public participation for the Special Economic Zone in Muhoroni be made public.

Outa said he was concerned with the Sh10 billion budget stalemate following differences between the executive and MCAs. He said the impasse could cause a financial crisis.

“The county risk not receiving funds for development and will only depend on recurrent expenditure should the standoff persist,” Outa said.

He said they agreed that leaders would meet often to discuss county matters but that has not happened since Nyong'o was sworn in. The meetings were to enable leaders deliberate on how best to improve the lives of residents, ensure inclusive government and equal distribution of resources and job representation.

Outa served as Nyando MP for two terms before replacing Nyong'o as Senator in 2017. He played a key role in securing Nyong’o victory in 2017 vote, mounting a strong campaign against Ranguma's reelection bid.

In March, Nyong’o came under criticism from nonnative residents under the Kisumu Diaspora Forum over alleged clannism and nepotism.

He was accused of favouring people from his Seme clan in employment, an allegation he denied.

Ranguma, former Kisumu Central MP Ken Obura, and businessman Hezron McObewa are some of those eyeing the governor's seat.

Former chief finance officer Cephas Kasera is also in the race. He has set up an office in Kisumu town and is developing strategies. He has been meeting elders from different parts of the county.

Obura, who is the EAC Chief Administrative Secretary, has hinted that he could join the fray. Obura enjoys a warm relationship with town residents. They say he has the capacity to fund and mount a high-end campaign.

He will ride on his development record, especially in education, having built many schools during his five-year tenure as Kisumu Central MP. He lost the seat at the last election to Fred Ouda.

He sponsored hundreds of students through Ken Obura Foundation, some of whom have joined universities. He has also been supporting development education infrastructure through fundraisers.

Obura has been traversing the county to reach out to opinion leaders, youths and the business community.

He recently presided over a harambee for classrooms in two primary schools. Sh1.8 million was raised.