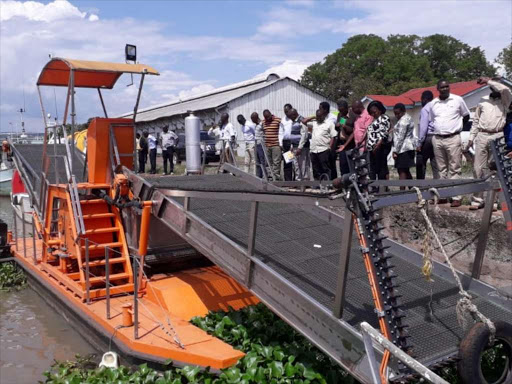 Members of the Parliamentary Committee on Regional Integration and Northern Corridor at the port last year. /FAITH MATETE

The Ethics and Anti-Corruption Commission is investigating the procurement of a Sh76 million water hyacinth harvester.

The machine, procured by Lake Victoria Environment Management Project and funded by the national government and the World Bank, stalled immediately it was bought.

It was bought from Italy in 2016 after it was established that the weed can be mechanically removed from the lake. Technicians cite missing components and mechanical problems for its state of affairs.

The equipment has been idle for three years at the Kisumu inland port as the invasive weed it was meant to harvest continues to choke the largest fresh water lake in Africa.Some Sh2.3 million is needed to buy missing hooks.

Senior LVEMP officers have been summoned by the anti-graft commission through February 8 letter addressed to their coordinator.

The EACC told the 11 officers to appear before its Western region office to record statements.

The officers started appearing before the commission on February 15. The last officer is expected to appear next Wednesday.

The anti-graft agency also sought the minutes of the meetings approving the purchase of the harvester and a copy of the World Bank tender regulation, Act or policy used during the tendering.

Other documents sought include tender opening registers, letter appointing members of opening and ministerial tender committees and letters of appointments forwarding the reports to the World Bank for no objection.

During a tour of the Kisumu port on Monday, High Representative for Infrastructure Development in Africa Raila Odinga questioned the procurement process of the machine.

He said the harvester was overpriced and the money spent on it was enough to purchase good machines at a lower price.

Last year, a parliamentary select committee said it would summon the Environment CS to explain why the hyacinth harvester stalled.

The Committee on Regional Integration and Northern Corridor said CS Keriako Tobiko should explain why the machine stalled.

Committee chairperson Gideon Ochanda said: “We have spoken with the management of LVEMP II and they have confirmed some hooks are missing from the machine.”

He said the ministry has failed in its implementation role to end the hyacinth menace.

“We cannot blame the commission because it has done its part of sourcing for money. The problem is at the implementation stage, which is under the Ministry of Environment.”

“The things required to make the machine operation again cost a mere Sh2 million. We are wondering how a whole government can wait for three years because of such an amount,” Ochanda said.

In October last year, a fisherman in Homa Bay was stuck in Lake Victoria’s water hyacinth for three days.

David Ouma, 34, said he had unsuccessfully tried to free himself from the weeds.

The fisherman was on an expedition near Obaria beach in Karachuonyo when he got stuck.

“I could not move forward or backwards,” he said.

A month earlier, four fishermen were stuck at Ngegu beach also in Homa Bay. They were rescued by a motorboat from Kenya Maritime Authority Kisumu office.

In December last year, two fishermen were stranded in Lake Victoria after their boats were trapped by hyacinth.