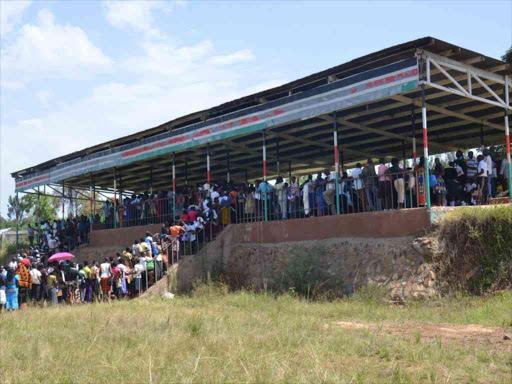 e dais of Migori county stadium. A couple are alleged to have had sex at the stadium on Wednesday evening / MANUEL ODENY

The unfinished Migori county stadium — questioned in the Auditor General’s report — has been turned into free lodging for randy couples.

The stadium contains the Migori ODM offices, which have been locked away from members. An office donation by Governor Okoth Obado was rejected.

Local ODM officials, led by chairman Philip Makabong’o, rejected the donation despite not accessing the county stadium office since July last year, when the stand-off started.

Couples not ready to pay lodging fees, the cheapest going for Sh300, now use the desolate stadium, the lonely podium and rundown buildings for their escapades.

On Wednesday evening at about 6pm a group of youth at Cossade Plaza opposite the stadium watched as a couple climbed the raised podium and had sex behind the wall.

“They were strolling like a couple walking into their bedroom. They started at the pitch towards the podium before making out for about 30 minutes,” said David Owino, who works on the second floor at Lavin Kenya, an NGO.

Owino said that was the second couple they saw in a day. Most come in the evenings and on weekends.

Winnie Otieno, a secretary at a construction firm, said the two main gates of the stadium are closed but couples access the venue from an unlocked gate behind Creadex Hotel.

“They always emerge from that point, walking hand in hand. Most are married couples and college students,” Odhiambo said.

He said used condoms are littered around structures used by the Agriculture Society of Kenya during shows before it moved from the venue two years ago.

“What happens in the stadium is a big letdown and an eyesore to locals. Sometimes couples from nearby clubs come to the stadium at night,” Odhiambo said.

Sports stakeholders have been calling on the county to finish the project so they can stop holding events on public school grounds.

Sports director Silas Jonyo said he is unaware the stadium is used as a lodging.