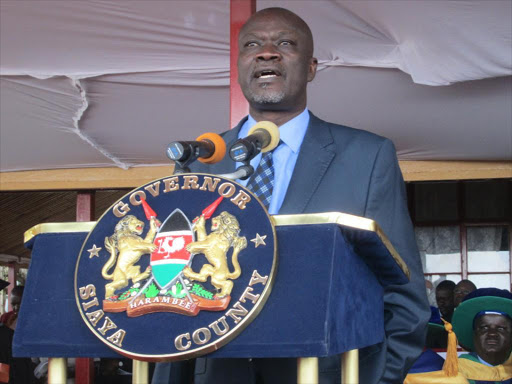 Siaya Governor Cornel Rasanga during a past function / ERIC OLOO

He said MPs Oburu Oginga (Nominated) and Opiyo Wandayi (Ugunja) are cheating Rasanga and giving him false hopes of benefiting from a direct endorsement in his re-election bid.

“Let Rasanga forget the notion that Raila will lift up his hands for endorsement this time,” Midiwo said.

He said he has gauged what the public wants.

Midiwo was speaking on Wednesday during a morning show on Radio Mayienga FM.

He said during a recent party meeting at the Bomas of Kenya, Raila reiterated that every aspirant should jostle for elective positions, and they should not expect his backing.

He said "careless utterances will scare out potential voters".

“There are a few legislators who backbite colleagues with Jakom, rather than consolidate votes for him,” Midiwo said.

Oburu and Wandayi have strongly supported Rasanga’s administration, to the chagrin of MPs from the region, who criticise his government.

Midiwo said the public is now informed and ready to make decisions that will shock “careless” leaders.

He cited the 2013 by-election, when a large percentage of voters supported William Oduol, although he lost to Rasanga.

“We marshalled the support of Cord co-principals Moses Wetang'ula, Kalonzo Musyoka and Kakamega Senator Boni Khalwale after Oduol proved to be tough,” Midiwo said. He said ODM defeated Oduol with a paltry 3,000 votes.

He said he knows Raila better than the self-proclaimed “powerful inner circle”.

Midiwo said Raila is tired of being dragged into "local politics".

He said he will either back Rarieda MP Nicholas Gumbo for governor or Oduol.

“I will not vote for Rasanga,I will lose with either Gumbo or Oduol or lose with both of them,” Midiwo said.