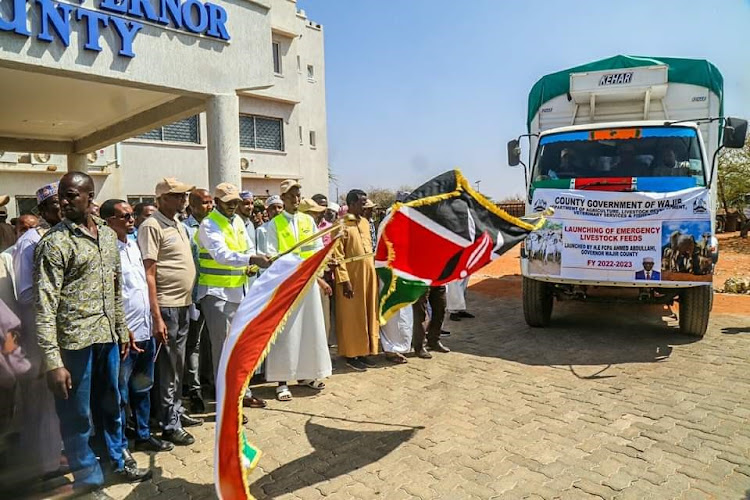 In a bid to mitigate the biting drought, the county government of Wajir has rolled out a number of interventions to ease the severity of the situation.

Speaking on Monday at the county headquarters in Wajir town, governor Ahmed Abdullahi said the county is currently in an alarm Phase of the drought with the situation worsening each growing day.

This, he said, has been characterized by an ever-increasing number of both human beings and animals in need of humanitarian assistance.

Abdullahi regretted that the County has lost about 8.4% of its livestock population to the ravaging drought which he said continues to threaten the people’s livelihoods and the local economy.

The situation has been due to the effects of drought in four successive seasons that is characterized by depletion of pasture and browse, drying of water pans and dams and consequently increasing stress on the existing boreholes.

“In order to safeguard the remaining herds and ease the challenges of finding feed for the surviving livestock. The county government has released animal feed procured through the County Drought Intervention program for distribution across the six Sub-Counties,” he said.

They include 22,000 bags of high-fibre range cubes, 4,000 jerricans of molasses and 2,000 Metric tonnes of Urea-molasses-mineral block (UMMB) feed supplement for our animals. 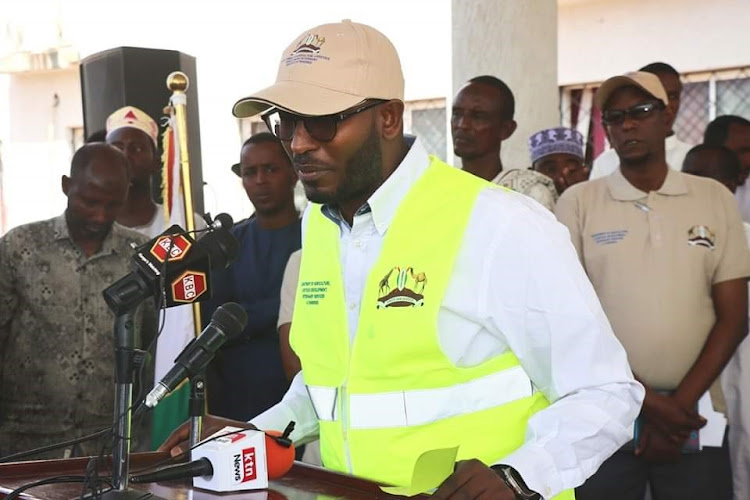 “We have also handed over 5,260 bags of livestock supplementary feed (Range Cubes) targeting 2,630 households courtesy of the Emergency Locust Response Programme (ELRP). This necessary and timely intervention shall go a long way in supporting at least 11,000 vulnerable households,” he said.

The governor also launched animal vaccines to cushion the herders following the outbreak of camel disease with signs similar to anthrax.

He noted that his administration has already responded by launching a mass vaccination exercise that was last week flagged off by Deputy Governor Ahmed Muhumed.

And in a bid to address the issue of water scarcity among the residents, the governor said his administration has moved to repair water bowsers which have supplied water to 155 centres. 15 boreholes have also been repaired.

Abdullahi at the same time urged the national government to enhance the school feeding programme in primary schools, which he said will help in the retention of children in schools noting that at the county level, they had reintroduced the programme.

“We have budgeted 200 million to boost the small and medium enterprises sectors where free interest loans inform of Revolving fund.

"This is to enhance income-generating activities for the vulnerable groups such as women and youth during this difficult period of ravaging drought,” he said.

A young boy with a donkey cart in the outskirts of Habaswein town in Wajir south on sunday. The biting drought is having an adverse effect on both human beings and livestock in the county.
Image: STEPHEN ASTARIKO

It also appealed for upscaling of health interventions including outreach programmes and the provision of nutrition commodities to curb malnutrition and disease outbreaks and spread is also necessary.

According to a December report from NDMA, a decline in rangeland resources including water, pasture and browse has led to low livestock productivity across the county.

"The strategic boreholes and shallow wells have also been experiencing high pressure due to the concentration of humans and livestock. Over concentration of pastoralists in areas of last resort for grazing and water resources has exacerbated an already fragile situation,” part of the report reads.

“Livestock prices have rapidly reduced due to the weakening livestock body condition, thus affecting households’ access to disposable income and food. Consequently, the number of households requiring emergency food assistance and support from both state and non-state actors’ safety nets keeps on increasing on a daily basis as the situation further degenerates,” it further states.