He attributed his good performance to long hours of study. 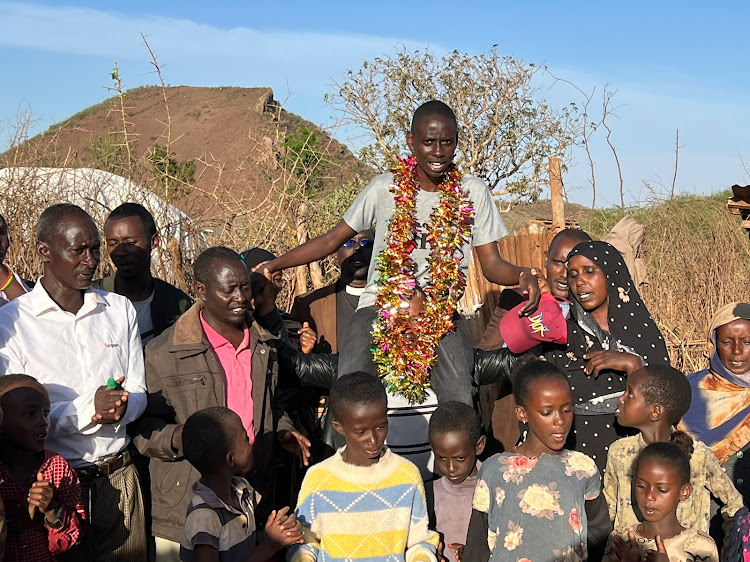 Marsabit Governor Ali Mohamed Mohamud's massive investment in education paid off yesterday with the county's scholarship scheme producing one of the best students in the 2022 Kenya certificate of secondary education examinations results.

Dida Roba Karayu, one of the pioneer students on county scholarship posted an impressive A plain of 81 points.

The 18-year-old alumnus of Maseno Boys High School is among dozens of students who have enrolled in a county government scholarship programme.

"I expected to get either A plain or minus but with this achievement, I will take a bold step towards realizing my dream of becoming a doctor," he said

He attributed his good performance to long hours of study, his teacher's efforts and his desire to lift the family out of poverty.

He urged beneficiaries of the county scholarship programme to work hard in their studies and achieve their targets in life.

The scholarship programme was unveiled in 2019 to support bright kids from vulnerable backgrounds and all pioneer students have qualified for direct university entry.

With a sterling performance track record, county scholarship pioneers have set high standards, motivating those behind them to work extra hard towards excellence.

Dida's mother Daki Roba Karayu as tears flew from her eyes thanked his teachers and the county governor for providing him with an opportunity in his education.

His father Roba Karayu praised Governor Mohamud for placing his son in the scholarship programme.

Former Sagante Jaldesa ward MCA Sora Katelo expressed his gratitude to the governor for initiating the scholarship programme which has reduced the load on the needy parents and guardians who were unable to carter for school fees.

"The scholarship programme is not only inspirational but very emotional to parents and students themselves," he said

"Such an achievement can only be experienced with a visionary leader like Governor Mohamud," he added

He said the governor's scholarship programme has contributed alot to the good performance as he revealed that a student from Garqarsa in Sagante who joined Maseno Boys High School and was being sponsored by the county government got A plain.

The education scholarship is aimed at supporting bright but needy students from the county to join schools of their choice.

The scheme's beneficiaries are now in top schools like Alliance, Mangu, Kenya High and others, the school which would not have been possible without the scholarship programme.

The educational programme is part of Governor Mohamud's push to ensure no child from the county misses out on their school of choice on account of fees.

Governor Mohamud while issuing bursary funds last year said it is only through education that the son and daughter of a peasant has an equal opportunity to become what they want to be the same way a son of a minister chooses what to be in life.

"Through education, the poor and vulnerable in the community have a fighting chance in life and a place on the high table of opportunities," he stated

Governor Mohamud gave a commitment as a leader to shoulder the responsibility of ensuring every deserving child is kept in school.

"Your well-being and schools are our responsibility as government and leaders and as you seek out your dreams, you will not walk alone," he promised

He added," it is only through education that we shall lift our people out of the vicious cycle of poverty."

Marsabit candidate Diba Matacho who was confined at Marsabit Referral hospital for three years because of his collapsed lungs scored an impressive B- in the KCSE exam.

Due to the collapsed lungs, Matacho could not breathe and had to live in the hospital.

Matacho expressed his happiness in passing the exam despite the challenges.

He thanked county first lady Alamitu Guyo Jattani who donated an oxygen cylinder and the hospital boss Liban Wako for the care.

He was first admitted to St Paul secondary school in 2014 before dropping out in 2017 due to illness.

Post a comment
WATCH: The latest videos from the Star
by ABDIKADIR CHARI
North Eastern
21 January 2023 - 12:37
Read The E-Paper